In many rural areas, people still choose traditional cakes as gifts for parties. Thanks to this, many skillful women and housewives can "make a living" with these traditional handmade cakes. 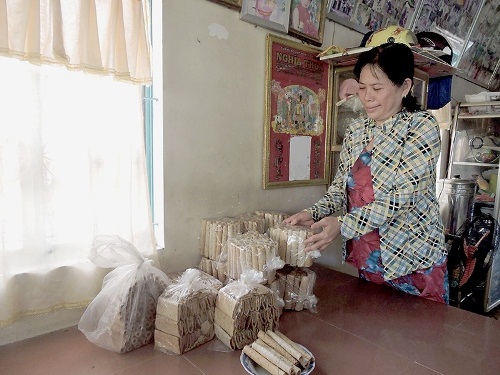 After being baked, the cake is carefully packed and ready to be delivered to customers. Photo: My Tu

Every early morning, we can easily see many young ladies selling traditional cakes such as steamed Vietnamese layers cake; rice cake, or mung bean cake or baked banana in Trung An market, Co Do district. These popular cakes are often chosen by many people as gifts for anniversaries or wedding ceremonies. Mrs. Le Thi Ngau, a 63-year-old woman who lives in Thanh Loc 1 Hamlet, Trung Thanh Commune, Co Do District, has 25 years of experience in making traditional cakes. She said that her mother used to earn a living by making traditional cakes in the past, but she only made steamed cakes such as Vietnamese layers cake, banana cake, baked or steamed rice cake. Later, after succeeding her mother’s profession, Mrs. Le Thi Ngau tried to learn and develop dozens types of cake to serve the needs of many customers. Since her cake is delicious and varied at a reasonable price, Mrs. Ngau’s shop gradually becomes the "brand name" which attracts many people in and out of the commune to buy or order cake.

Mrs. Ngau said: "In the past, when I started making cake, I only thought of this as a second job to earn more money, but from 1996 until now, this work has become my main job." Mrs. Ngau uses part of her house to build a large rice-husk furnace and four wood-burning stoves. There are also electric oven, coconut shredder machine, and electric egg beater in her house. Her cake shop is very well-known to many customers. Between 1995 and 2001, she had to make cakes from dawn to dusk almost every day. Later, her children had to study far away from home which leads to a lack of assistants so Mrs. Ngau had to rearrange her work. So far, every day, she makes 20 loaves of rice cake, steamed Vietnamese layers cake which are sold at the market for 35,000 VND/loaf. It is very common for her to make 25-30 loaves when there are so many orders. In order to sell cake at the market at 6am, she often starts preparing every step from 4 pm the previous day and wakes up at 4am in the next morning to bake and steam cake. On the day guests order pound cake, mung bean cake, Gai cake and so on, Mrs. Ngau must take advantage of lunch time and a few hours in the evening to fulfill the orders. Surrounded by sugar, flour, eggs, milk, cake molds and stoves, this job helps Mrs. Chau earn a decent income, enough to cover living expenses and support her husband in raising their two children. In Mrs. Ngau’s opinion, we just need to be handy, hardworking and be able to create many kinds of delicious, clean and safe cakes; it is therefore easy for housewives to live well with this job.

By Van Lich rivulet, Thanh Phuoc 1 hamlet, Thanh Hoa ward, Thot Not district, there is Mrs. Le Thi Nguyet, a 49-year-old woman who has 25 years of experience in making waffles. She said that thanks to the enthusiastic instruction and advice from friends, Mrs. Nguyet chose this job and gradually stopped doing farm work. She then stayed home taking care of her children while making waffles for sale. She said, "At first, I made waffles and introduced them to some grocery stores, then people came to shop there could try eating my waffles. The customers found my waffles delicious so they ordered more and more. Right now, 20kg of cake per day is not enough to sell”. Waffle looks simple but it is not easy to make it crispy, aromatic, fat and delicious.

Every day, Mrs. Nguyet wakes up from 5am, blends the flour in a special recipe and has the waffle baked on 5 stoves continuously until 9am. After that, she delivers a half to the market and the other half for retail at 80,000 VND/kg. For many years, Mrs. Nguyet’s waffle brand - Hoang Nam has attracted a lot of clients. Thus, thanks to this dish, Mrs. Nguyet has a decent income which does not measure up to other small traders. Particularly, she makes 40-50kg of waffle daily every Lunar New Year and it is still not enough to sell throughout Kitchen God Day to 30th of December.

Not only all types of pastry, some professional bakers also make dumplings, small stuffed glutinous rice flour balls , bánh tét, steamed glutinous rice and various types of sweet soup to serve diverse needs of customers. Near Tet holiday, in the chilly air at the end of the year, sitting near coal burning furnace, waiting for the baked cake with the delicious smell and listen to the workers show off about their good lives with the profession, we also feel happy and wish for good health and prosperity in New Year.


Source: Can Tho Newspaper. Translated by Hoang Dat