An interesting discovery of Southerners’ Tet Holiday is their cuisine as well as their personalities. They are neither fussy nor sophisticated. Their common saying is that enjoying Tet is "easy-going" and "irresistible", and so they usually put aside their daily activities to celebrate the Lunar New Year in a very Southerners’ generous way. In the current age of integration, the process of globalization and the development of science and technology have partly changed how Vietnamese celebrate Tet Holiday, especially in the South - the central land where there have been a lot of cultural exchanges and economic development occurring every day. However, the traditional dishes such as Tét cake (cylindrical glutinous rice cake), braised pork with eggs, stuffed bitter melon soup, pickled leeks and dried shrimp, rice paper rolls, etc. have become indispensable on local Tet Holiday. These dishes are meaningful reminders of the Southerners’ culinary styles during their land reclamation in the past: simple and suitable for the hot and sunny climate here. It is an indispensable traditional dish of the Southern people on Tet Holiday. The origin of the dish is still in discussion. Some people think that Tét cake is a product of the Viet-Cham cultural exchange; others say that one day on Tet Holiday during the famous battle against Quin enemy, a soldier offered King Quang Trung a glutinous rice cake sent from his family. The King was moved finding his cake was very delicious, and then the King ordered his people to make this cake on Tet celebration. This tradition is to memorize our historical victory against Quin enemy as well as to show the family affection on Tet Holiday.

The cake is said to be “bánh Tết” at the beginning - The cake was made and offered to the ancestors on Tet Holiday. Later on, people mispronounced its name into “bánh tét”. Some say that the name originated from the way to eat the cake - tét bánh - using a string to cut the cake into slices.

Despite such different viewpoints on its origin and name, “bánh tét” - symbolizing the fullness and goodness, has become a meaningful traditional cake in the Southern life for generations.

Tét cake conveys the philosophy of yin and yang, the five elements of the universe as well as the harmony of the heaven and the earth. The grains of rice are the essence of harmony between yin and yang, between the Heaven and the Earth; the cake’s 5 colors represent the five elements of the universe: black (pepper) symbolizes the Water; red (salted egg yolk or red paper on the wrapper of the cake) the Fire; green (leaves, the cake crust) the Wood; white (pork fat) the Metal; gold (mung bean) the Earth.

In spring, all family members gather around a Tet banquet enjoying delicacies of Tet cake in the pleasant green leaves, the sweet sticky rice and the flavorful pandan leaves, the greasy pork, the sugary nutty mung beans and the spicy black pepper. Such impressive flavor combination lasts long in your memory of Southerner traditional Tet.

Another typical Southern dish is called with various names Thịt kho hột vịt, thịt kho trứng, thịt kho nước dừa, thịt kho rệu. People usually believe that the dish originated from China, but according to Mr. Binh Nguyen Loc, a writer, the word "tàu" here does not imply người Tàu (Vietnamese word for Chinese people), but means "not salty", and so it is undoubtedly a Vietnamese dish.

When Tet comes, enjoying a tender golden brown braised pork dish served with pickled bean sprouts or pickled leeks, you then love the good-smelling, subtle sweetness of the coconut and savory pork. This dish will definitely bring you the heart-warming and generous Tet in Southern families.

It is no coincidence that the Southerners choose “thịt kho tàu” as the typical dish of the Lunar New Year. It is because this “real” Vietnamese dish presents their hopes for a new year of integrity, prosperity and fullness. Braised pork in equal cubes symbolizes yin, and duck eggs, yang, in one dish, which suggests the integrity throughout the year.

In the Southerners’ mindset, food is often chosen according to the meaning of its name, utterance or images of affluence. For example, the five-fruit tray includes custard apples, figs, coconuts, papayas and mangos, whose names in Vietnamese literally homonym with cầu (pray for), sung (richness), dừa (adequate), đủ (enough for), xoài (expenses) or these offerings to the ancestors have our wish  for being rich enough for our expenses come true in the coming year. In order for the tray to become more colorful and meaningful, they also display other fruits such as tangerines (means goodness), kumquats (benefits or successes), and pineapples (good rumors or fragrance). Watermelon on display on lunar January 1st must be red, which means good luck in the whole year. In contrast, bananas must never be on the tray because its pronunciation chuối sounds like chúi (go down or failure)".

Bitter melon broth is also an indispensable dish of Tet in the South. A bowl of bitter melon broth served in a Tet banquet guarantees the peace in mind for all family members because its name khổ qua literally means all hardships of the old year will go away, which represents the hopes for a new year of all successes and luck. 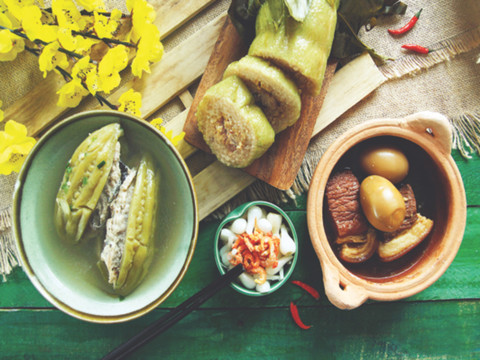 This broth has the combination of pretty savory sweetness and a little bitterness. Bitter melon is also antipyretic, detoxified and regains your appetite after eating other high-protein and fatty dishes on Tet Holiday. This humble fruit is very easy to grow and easy to cook. What you need is a few fresh bitter melons and minced pork or clown knifefish. Cut melons in halves and then remove the seeds. Then, mix minced pork with ground pork or clown knifefish and some seasoning. Stuff the melons with such mixture. Add the stuffed watermelons in the boiling broth and stew them until they are well done. This simple way of cooking is similar to the rustic nature of the Southerners.

This dish is easy to prepare and easy to serve. Every household prepares rice paper in advance, and what they need to enjoy this dish during Tet Holiday is some fresh vegetables, herbs, pickled leeks, and dried shrimps.

Bánh tráng cuốn partly demonstrates the style of the Southerners. Being simple or unsophisticated, they favor homely easy cooking styles with little attention to the appearance. Such culinary practices express the Southern sincerity - the typical "trait" of Vietnamese people in the South.