(Bánh Đúc lá dứa is a dessert made from non-glutinous rice flour or corn flour. It takes the form of gelatinous blocks that are often colored green by the addition of pandanus amaryllifolius (pandan) leaf extract. It is cooked by boiling the ingredients and allowing them to cool, solidifying into a jelly-like sheet that is then cut into blocks.) 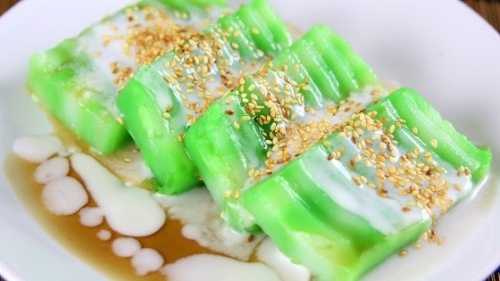 Bánh Đúc lá dứa is Can Tho specialty

The women wearing conical hat, working as street vendors and wandering on every corner of Can Tho streets becomes the beauty and the familiar picture to local people.

If you have an opportunity to travel to Can Tho, you should not be hesitant to try the must-not-miss specialty called Bánh Đúc (Pandan rice cake) which is a truly rustic specialty of the city’s culinary. The dishes have absolutely taken the hearts of many people who love cooking both in and outside of the country.

Can Tho is located in the downstream of Mekong river and the central of the Mekong delta. Can Tho is famous for its interlacing river system, abundant orchards, immense paddy field, Ninh Kieu quay, Cai Rang floating market - a place of typical southern culture. 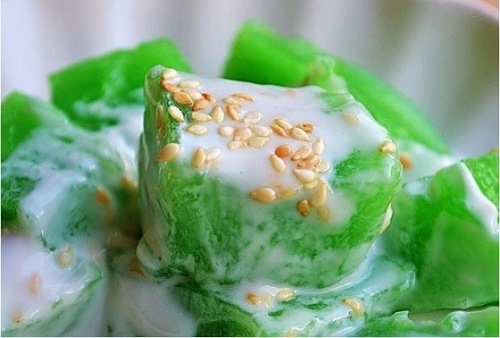 In Can Tho, there two kinds of Bánh Đúc namely, Bánh Đúc colored with Pandan leaf extract, and Bánh Đúc made with salt. Despite their unique taste, both bring the savory flavor of the countryside, which is rustic but scrumptious.

Selected shrimp must be fresh, washed, peeled, withdrawn the intestine and squeeze the shrimp roe into a bowl, add two teaspoons of sugar to the shrimp roe and then blend them together, use a knife to finely chop the meat and head of shrimp along with minced pork, then make it available to be used.

An indispensable part of Bánh Đúc (Pandan rice cake) is cassava: cassava is peeled; washed, chopped and minced. Purple onion is peeled, washed and finely chopped. After that, the mixture of shrimp, pork, and chopped cassava is marinated in salt, sugar, monosodium glutamate to suit the taste. Pan-fry the chopped spring onion to create Aroma and then put the mixture into the pan to stir-fry it. The shrimp roe is the most important to make the cake’s filling yummy and have an attractive color. If there is no shrimp roe, we can use the color of the cashew nut instead.

The final phase of making Bánh Đúc (Pandan rice cake) is to steam the cake. Before pouring the paste into the mold, apply a layer of cooking oil to the mold in order for the cake not to be stuck when we take it out. Place the aluminum molds in the steamer when the water is boiled, pour the first layer of paste into the mold, and put the lip on. The difficult part is to set the time so that the first layer is nearly cooked then we continue to make the second layer, and keep going on until the mold is nearly full, put the mixture on the top of the Pandan rice cake and steam them together. Let the cake cool down, take it out, and cut it into diamond or rectangular shapes. 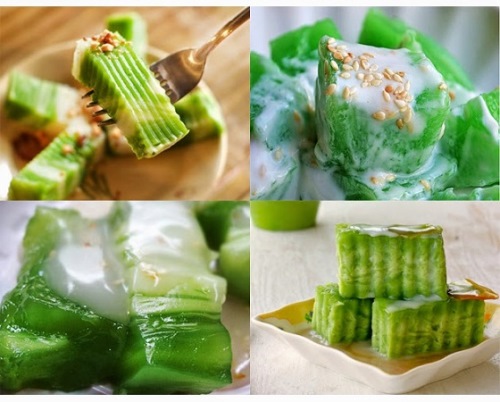 Bánh Đúc (Pandan rice cake) is usually served with the sweet and sour fish source with garlic and chili. To enhance the flavor of the dish, diners should eat with sliced cucumber, hot-water soaked bean sprout and herbs. Moreover, you can add a few spoons of warm coconut milk to make the cake sweeter and greasier.

Bánh Đúc lá dứa (Pandan rice cake) is quite similar to Bánh đúc mặn (rice cake made with salt), but the former is sweet, brings the beautiful green along with aromatic feature of pandan leaves. How to make Pandan rice cake is quite simple. The rice is soaked thoroughly before being put into the mortar, and grind it into flour. Then, the Panda leaves are carefully washed, milled and filtered for their juice. Next, pour the rice flour and the juice into the pot to boil them, the secret to have a delicious Pandan rice cake is to pay attention to the fire and stir evenly. If you want to increase the toughness of the cake, add a little lye water. Bánh Đúc (Pandan rice cake) is served with two kinds of sauce namely coconut milk and sugar water. About coconut milk, we extract coconut meat from the brown coconut, cut coconut meat into pieces and blend it with a little tapioca starch powder and cups of warm water, then strain the mixture with cheesecloth to have the paste; next we squeeze the paste tightly to make the white and thick liquid called coconut milk. Sugar water is cooked to be dried together with some pieces of roasted peanut sprinkled on the top of the cake. Taste a piece of Bánh Đúc (Pandan rice cake), you will feel fully the typical flavors dissolved together in a simple but delicate dish.

If you have an opportunity to visit to Can Tho, you will occasionally see some venders selling this dish on the street. At that moment, you shouldn’t hesitate to try a delicious bowl of Bánh Đúc (Pandan rice cake). It is truly wrong not to try this specialty of the river area in both “versions”.  Not only do you feel the flavor of the cake itself but also the taste of cultural beauty of Can Tho people over the years.