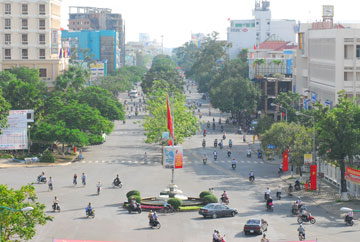 Climate:  Can Tho is located in the region of tropical monsoon climate, few storms, hot and humid all the year round, no cold season. The rainy season lasts from May to November whereas the dry season lasts from December to April the following year.

The annual average temperature is about 28 degrees Celsius (28oC)

Rivers: Can Tho river originates from the interior area of the western Hau river, with the length of about 16 km, the width of 280-350m, passing through O Mon, Phong Dien, Cai Rang, Ninh Kieu district and flowing into The Hau River at Ninh Kieu Quay. Can Tho River contains fresh water all year round, which has both functions in irrigating water in the dry season and draining redundant water in the flood season as well as being a great significance in the traffic.

Besides, Can Tho city also has a complex canal system, with more than 158 rivers and canals which are the tributaries of two large rivers, namely Hau River and Can Tho River. The two rivers pass through Can Tho city, which constitute and connect the network of waterways. The other arroyos are Binh Thuy, Tra Noc, O Mon, Thot Not arroyos, Tham Ron canal and other enormous canals in several surburban districts of Thot Not, Vinh Thanh, Co Do and Phong Dien. They supply fresh water during the sunny and rainy seasons, which creating good conditions for farmers to do irrigation and soil improvement.

On January 1st 2004, Can Tho province was divided into two new administrative units namely Hau Giang province and Can Tho city. Since then, Can Tho has become an independent municipality at the same level as provinces of Vietnam.

On April 19th 2009, the Prime Minister sign the decision No. 492/QĐ-TTg about approving the scheme on establishment of the Mekong river delta key economic region, encompassing 4 provinces and centrally run cities namely Can Tho city, An Giang province, Kien Giang province, Ca Mau province. The purposes of this decision are to fully-improve the potential, geographical position, comparative advantages of the region and steps by steps develop the key economic region of Mekong Delta into one of the major developed areas in terms of rice production, aquaculture and fisheries, which contributes significantly to agricultural products export of the whole country. Among those developed areas, Can Tho city is “a developed pole”, which plays a vital role so as to strongly impulse the development of the entire Mekong Delta areas.