The name is rather confusing. Tourists find it difficult to visualize this famous dish in Soc Trang as a rice noodle (bún) or delight salad (gỏi). 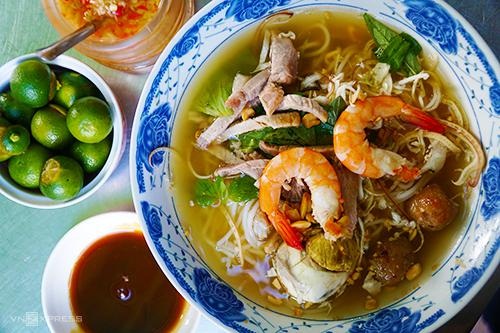 This specialty seems unfamiliar to tourists to the Western South of Viet Nam. Local people say that it originates from spring rolls. People put all the ingredients such as rice noodles, shrimps, boiled pork and raw vegetables into a bowl instead of rolling them in a sheet of rice paper. Besides, Westerners enjoy the dish by sweeping food or rice into the mouth (và /lùa). Because of its mispronunciation, it was called bún gỏi dà.

It tastes quite similar to the fermented thick Vietnamese rice noodle soup (bún mắm). Formerly, it was a dried rice noodle dish which was served with a small bowl of broth. Later on, people in many places have thought of a new way to serve it_ putting everything in a bowl of rice noodle soup. Its broth with the sourness of tamarind and the distinctive flavor of fermented soybean makes it easy to be recognized.

It looks eye-catching due to white threads of the rice noodles and reddish shrimps on top. Sometimes, people add coconut flesh or balut to enhance its taste.

The dish incorporates with popular vegetables such as bean sprouts, banana blossom and basil. Peanuts are moderately added to raise its greasiness. When presenting the dish, people also provide customers with a tiny bowl of fermented soybean paste. The dish would be better if you add some kumquat juice and chilli.

On the trip to the Western Region in the south of Vietnam, when inquiring about its origin, you will hear,

(i.e.  Mỹ Xuyên has bún gỏi dà. Try it, then you can feel the ‘sweet’ flavor of the homeland.” These sentences highlight this famous dish in My Xuyen, Soc Trang. However, the dish has become popular in a lot of big cities in the Mekong River Delta. 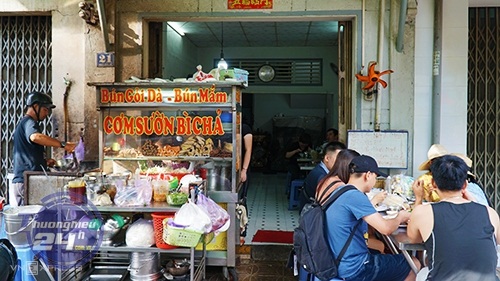 For instance, bún gỏi dà is a main dish served at Chánh Mập Eatery located at 21 Ngô Đức Kế Street near Ninh Kiều Quay. It opened up 44 years ago when the hostess was just 16 years old.