Tourists who have a chance coming to the Southwest will not be able to ignore any special dishes with noodles, such as Ben Tre’s paté noodles, Sa Dec’s and Dong Thap’s noodles. Local people or others living in the South will all recognize that noodle is a specialty which has never stopped being hot. Visiting the Southwest, you definitely cannot help enjoying these famous noodles as following: 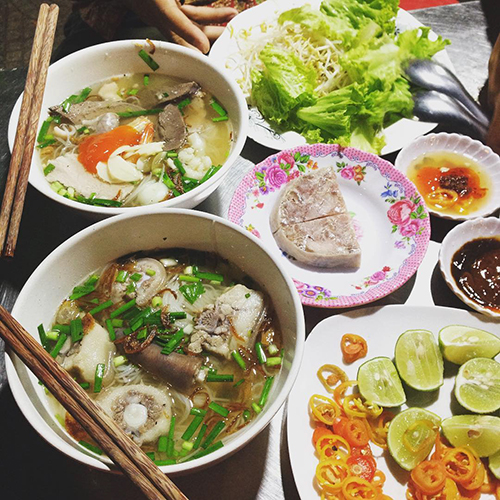 Be made in the original region of coconut trees only, the dish has a name that makes everybody be more curious and imagine a bowl of noodles served with a soft and tough paté in the soup. Just have a quick look at and really enjoy it, you can realize the sophistication and creativity of Ben Tre inhabitants when making this kind of food.

A piece of paté, version of Ben Tre (in a plate), which is not broken in a bowl of soup, served with noodles will create a strange taste, aromatic and fatty. Price for a bowl of food is approximate from VND 25,000 to VND 35,000.

The paté here is not a kind that people used to eat with bread, it is a pork-pie. This chewy and crispy pie is made from meat, fat, tongue and skin of pig. Gradually becoming acquainted, when enjoying noodles, the locals always ask for such a paté as gourmets. You can easily find this food in many main roads of the city. 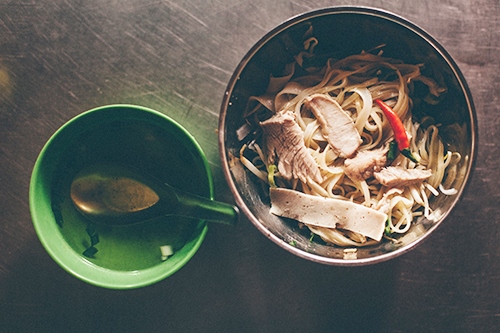 The rice flour making in Sa Dec was formed over 100 years ago. People here specialize in producing noodles of all kinds to export. Because of this, noodles in Sa Dec met the demands of markets by their quality and design: white, smooth, soft but not friable and sour.

Although in a small or large restaurant, noodles in Sa Dec always bring a common flavor which is very different from any other places in the country because of their available materials from many processing generations. Also, dry noodles are local favorite.

According to some long-establish shops, Vietnamese people who used to live in Cambodia have brought the cuisine style of making noodles here to Vietnam to create dry noodles with sweet and sour sauce without losing their native taste. Visitors can enjoy it in Ms. Sam’s restaurant, one of the famous addresses for eating noodles in Sa Dec. 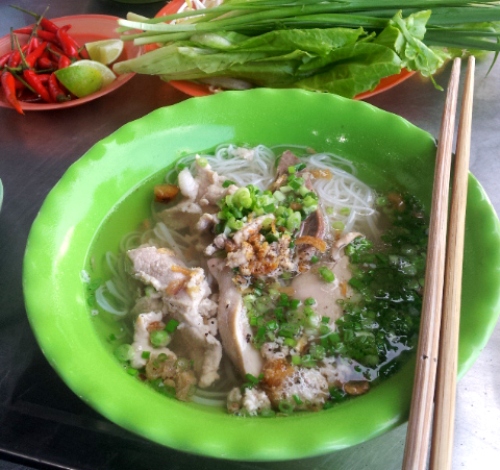 Nam Vang noodles are said to be dishes of Chinese people who firstly made and sold them in Nam Vang (now is Phnom Penh, the capital of Cambodia). Lately, Vietnamese people brought this recipe back to Vietnam and create into other version with smaller shape of noodles.

In general, Nam Vang noodles seem to be like My Tho ones. But, in fact, they are different from the way to cook. With noodles in foreign country style, people used minced meat instead of stewed bone to make soup to create sweet and fatty flavor.

Chau Doc must be a place for you to enjoy this dish with original flavor. Photo of Huong Chi.

The obvious point of an original noodle bowl of Nam Vang is to be served with internal organs of pigs. In many places, people add more materials beside a must, minced meat, like shrimps, crabs, fish, squid, and so on. 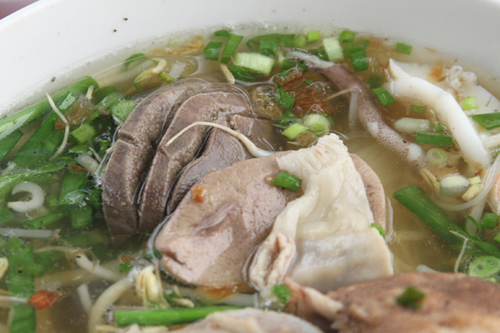 Talking about noodles, Vietnamese people usually refer to noodles in My Tho more than other places because the shapes of noodles here are small, chewy, dry with slight turbid colour and a bit sour taste, special favor that cannot be mistaken.

The noodles are pure, chewy and not be broken when cooked because they are made from special rice in Go Cat. Photo of Huan Phan.

The original My Tho’s noodles are served with stewed soup from pork’s bone and white radish, decorated with some lettuce leaves and meat or seafood. 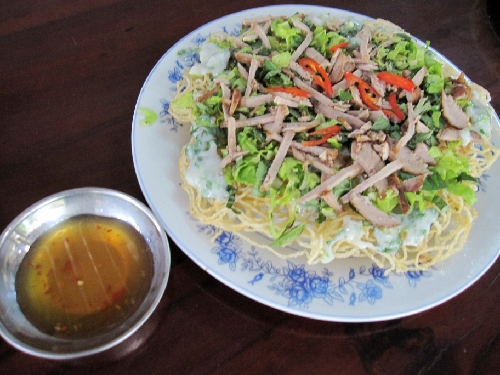 It is called a “later born”- kind of noodles but it is a specialty in Tay Do which is known by many tourists, especially foreign ones. The dish with half foreign and half Vietnamese name is a creation of a three generation noodle producing place, about 4 kilometers from Cai Rang floating market.

The noodles are made from high quality rice and have got an ivory - white color. The way to make pizza noodles is rather sophisticated. People mix noodles with pepper, sugar and put into a pan of boiling oil until the noodles become colorful and crispy. Then, the chef will put them out and add some green onions, meat or eggs, peanuts and coconut milk.

With chewy character, in typical Vietnamese cuisine, pizza noodles are not broken when frying, raising the crispness and beautiful appearance for the food. Each meal is priced around VND 30,000.