The Mekong Delta is well-known for its abundant fishery resources, among which shutchi catfish (or cá tra in Vietnamese) is considered a natural gift to the locals in the Western South of Vietnam. 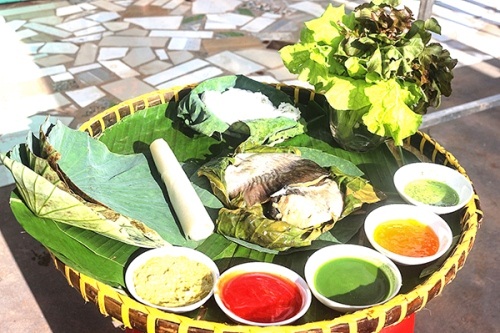 This easy - to - feed fish with naturally sweet and greasy taste is favored by both locals and foreigners. This typical product of the Mekong Delta has become an advantage of Vietnam since it was exported and accepted in a lot of markets in Europe, America, China, ASEAN, Middle East and so on. However, this fish is commonly known as yellowtail catfish (cá ba sa in Vietnamese) in forms of fillet and frozen fish, and its nutritional value is not fully recognized. Here, in the west of Southern Vietnam, visitors can enjoy its complete sweet, fresh and nutritious flavor from the dish called “Shutchi Catfish in five spices” (cá tra ngũ vị in Vietnamese).

Mrs. Le Thi Be Bay, a contestant in the third Mekong Chef in 2017, created this dish. This new dish helped her win the third prize of the contest. It has gradually become a specialty of Can Tho City to be enjoyed by international visitors when traveling to this place. In fact, many delegates have selected this specialty for their meals at the ASEM Conference held in Can Tho recently. According to foreigners, the essence of this dish comes from its whole sweet taste, freshness and flavors. Such wonderful combination makes it strange, beautiful and stimulating. Five-spice sauce in five distinctive colors makes the dish more beautiful and more flavorful.

Ms. Le Thi Be Bay says, "Steaming is the best way to cook fish so as to preserve its complete freshness and nourishment. However, I have hesitated a lot whether or not to steam shutchi catfish. To eliminate the fishy smell, I have thought of making use of a particular sauce, and then this sauce has been a great success."

The steamed catfish has white meat mingling with the nice smell of citronella and lotus leaf. It can be served with five types of homemade sauce. The first is both sweet and sour, made from tomatoes and Son Islet fish sauce. The second one, cheese sauce, is a bit fatty and salty, surprising customers as it is wonderfully combined with sweetness of the fish to create a strange yet attractive taste. This sauce is made from cheese, salted egg yolks and red coriander, whose blending represents a nice combination in the East-West cuisine. The third sauce which produces sweet and sour fragrant is made from kumquat jam and honey mixed with minced coriander. Those who prefer spicy taste can try the fourth sauce made from green pepper and fresh milk. The sauce is both spicy and elegant. Finally, homemade mustard sauce brings its diners a new flavor of this five-spice shutchi catfish. 30% of this sauce is Japanese pure mustard mixed with green mustard, water dropwort. Strong taste of this sauce comes from hot mustard and aromatic herbs.

In fact, this simple dish requires much time, care and creativeness. It shows an exchange in Eastern and Western culinary cultures, but still keeps its typical traditional features.


Source: Can Tho Newspaper. Translated by Diep Truong