Can Tho is the largest, most modern and most developed city in the Mekong Delta, and it is also classified as the First Class city or centrally-controlled city which is located on the right bank of Hau River in the Mekong Delta. Can Tho is the second largest city in the Southern region after Ho Chi Minh City and the fifth largest city in Vietnam after Ho Chi Minh City, Hanoi, Da Nang and Hai Phong. In 1739, Can Tho was exploited and officially appeared on the Vietnamese map with the name Tran Giang. Through the ups and downs of Vietnamese history, Tran Giang has undergone many changes in its name and administrative boundaries. The Nguyen Dynasty, Can Tho was the old land of An Giang province. During the French colonial period, Can Tho was separated to form a province, once called Western Capital (Tay Do), and became the center of the South-western region. 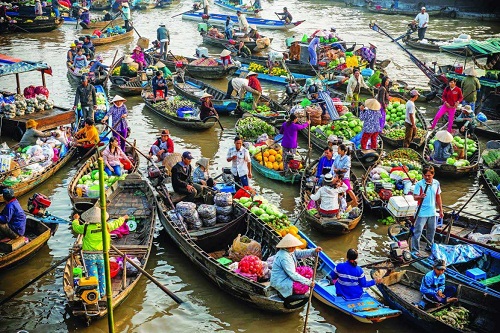 Can Tho is the capital and core city of the South-western region since the French colonial period, and continues to be the economic center of the Mekong Delta. In addition to its geographical features as an important hub for transportation between the provinces in the region, Can Tho City is also known as a "city of rivers". The city has an intricate river system, extensive orchards and vast rice fields. Can Tho is also famous for its Ninh Kieu quay, Cai Rang floating market as some characteristic features of the Southern region culture. 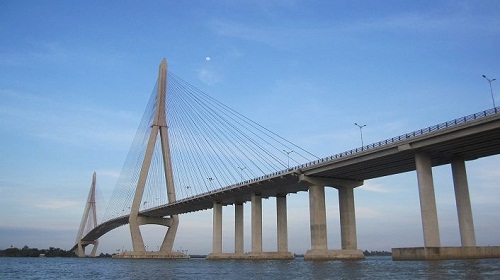 Can Tho bridge has some common features of the cable-stayed bridge, with some characteristics as follows:

The pile foundation is a bored pile with a diameter of 2.50m with the longest length in Vietnam (94 m) and each pile has 45 tons of steel with reinforced steel of 38 mm diameter and approximately 500 m³ of 30 Mpa concrete. The Northern pier has 30 piles and the Southern pier has 36 piles.

The bored piling machine works on the principle of reverse circulation drilling system using 5% bentonite mixed with polymer. At the Northern pier constructed on the land, a 2.60m diameter steel pipe with the thickness of 22mm and a length of 12m should be used as a temporary casing. 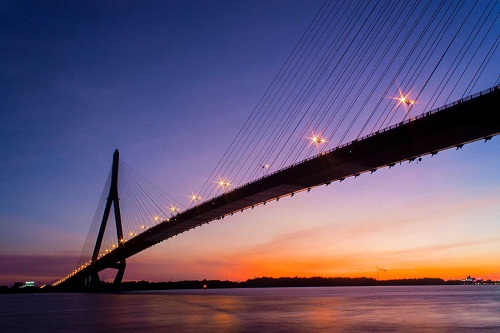 The southern pier footing is constructed underwater with the depth of 20m, so workers have to use a 42m long casing to keep the pier fixed (do not retract the casing after bored piling). After pouring concrete, concrete piles are pumped with a high pressure pump to increase the bearing capacity of pile.

The northern pier footing is built on the ground, so workers just have to make a foundation pit and install a normal concrete casting. As for the southern pier footing, which is constructed under the water, the bottom and the surrounding ring should be pre-casted on the land and assembled on top of the piles into the formwork attached to the pier footing. 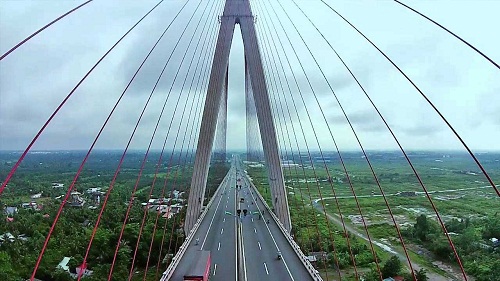 The reinforced steel for constructing the pier has the largest diameter of 52 mm and is connected with a threaded connector. Verification test shows that when pulling to damage the reinforced steel, only its body is broken, not the joint. The height of the pier footing from the water surface is 164.80 m and from the deck is 134.70 m. The head is shaped in the inverted Y and the legs are closed to narrow the area of the pier footing, this shape is very beautiful and elegant, unlike the H-shaped. The pier footing is symbolized as praying hands gesture in the Asian spirituality.

Ninh Kieu quay now known as Ninh Kieu Park is a wharf, a tourist site and a cultural destination of Can Tho city formed from the 19th century. Ninh Kieu quay is located on the right bank of the Hau river, between the confluence of Hau river and Can Tho river bordered by Hai Ba Trung Street, Tan An Ward, Ninh Kieu District, Can Tho City. 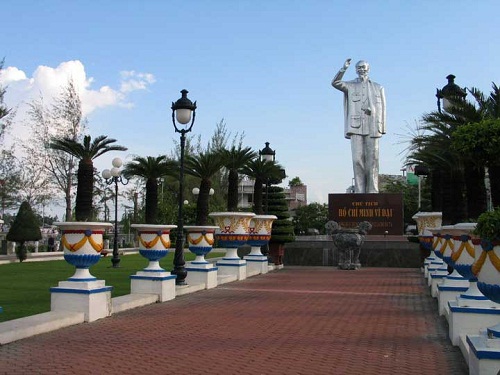 Ninh Kieu quay is a long-standing tourist attraction which attracts visitors with charming rivers and convenient location overlooking the Hau River. Ninh Kieu quay has long become a symbol of poetic beauty on Hau river banks and Can Tho city, attracting many visitors and becoming a poetic symbol.

On February 6th, 2016, the first tourist pedestrian bridge of Can Tho city was inaugurated, attracting large crowds of people and tourists after nearly a year of construction. 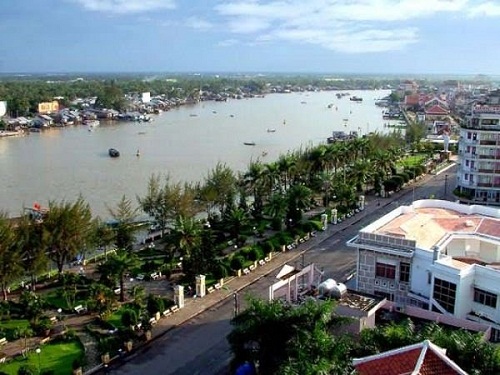 The deck (bridge) is designed with an S-curve symbolizing Vietnam. There are two lotus statues at the two extension parts of the bridge. 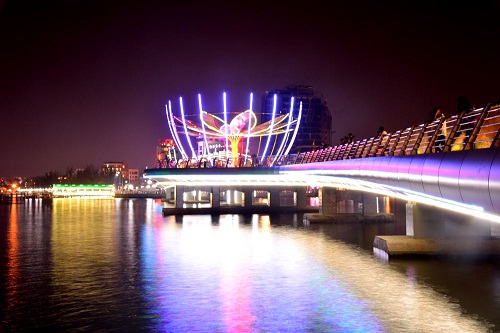 The LED lighting system on the bridge is controlled under different scenarios to create a lively and modern beauty. The system of trees and flower pots outside the balustrade of the bridge is automatically watered and drained for convenient maintenance. 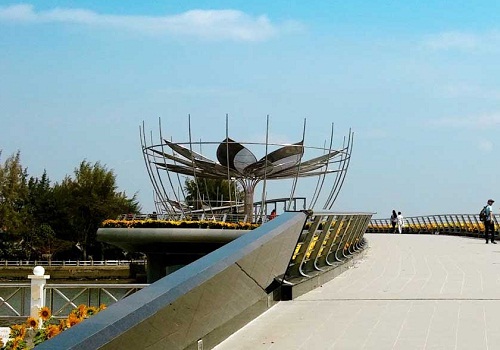 Ninh Kieu quay is a famous tourist destination and a pride for the Can Tho people through the proverb:

“Can Tho has Ninh Kieu Quay,

A beautiful river and lovely beauties”

Cathedral Diocese of Can Tho

Can Tho Cathedral Diocese with the title of Sacred Heart of Jesus is the cathedral of Can Tho Diocese located at Nguyen Thi Minh Khai Street, Can Tho City. 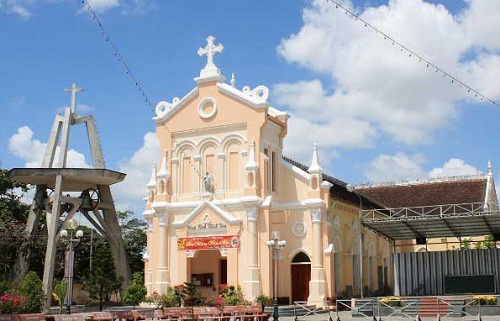 In 1899, under the bishop Bouchut, Bishop of the Diocese of Phnom Penh, Father Duquet (Paris Foreign Missions Society) as pastor of Can Tho began construction of the church with a budget of about 700,000 dong.

The construction work was not completed yet; Bishop Bouchut had transferred Father Duquet to Phnom Penh Seminary as a new director. Then, the building was inaugurated by Father Larrabure in 1916.

On November 24th, 1960, by the Venerabilium Nostrorum edicts, the Vietnamese hierarchy was established. Then, Can Tho Church became Can Tho Cathedral. Bishop Philippe Nguyen-Kim-Dien was ordained prelate of Can Tho diocese and succeeded Bishop Paul Nguyen who became archbishop of Sai Gon archdiocese. 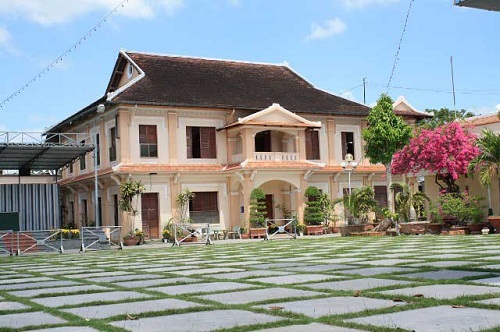 Inside the church, there is a tomb of Bishop Jacques Nguyen Ngoc Quang and Bishop Emmanuel Le Phong Thuan. As the number of parishioners increased, in late 1993, the church was rebuilt and two more extension parts were established to meet the needs of the laity.

Historically, Chau Chau Van Can was one of the most famous and respected civil servants in the country. The centennial of the school is evidently a hallmark of not only the students, but also a familiar image familiar to indigenous peoples. 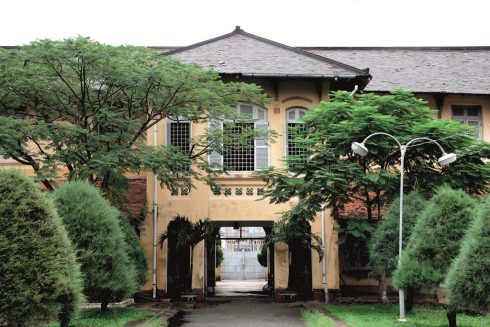 In terms of architecture and decorative arts, the school has the extraordinary beauty of a massive structure with many details, applying the Art Décor style prevailing in France at the time to the construction of the school in order to create a special inheritance of the Western Capital (Tay Do).

Three-storey building with two floors of Chau Van Liem School has created a parallel layout with the length up to 75m long and the width up to 12m wide. The school is constructed with inclined tile roof, mixed brick floor, jalousie door, a corridor with roof connected by wide open spaces and shady trees. 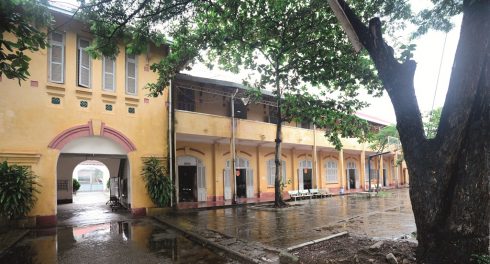 Two buildings used as office have drawn for the overall architectural space of the school more detailed and seamless. The architectural planning of the school has the appropriate function which is the ideal place for studying, teaching of the teachers as well as students through generations. 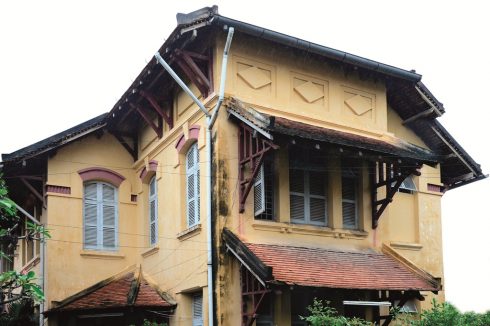 The architecture has been more or less degraded over the years due to the changes of weather. Now, the first horizontal building line has to replace tile roof with metal roof and the last building line stops being used. The foundation of the architecture is lower than the general level so it is easy to get flooded with heavy rain or flood. Besides, there is still no good solution to overcome this problem thoroughly; therefore, one building has to be closed to ensure safety. Five buildings were built from France period, but only three are currently in use.

Wat Munir Pagoda is a large Khmer pagoda in Can Tho city. This pagoda is not only one of the most beautiful pagodas of the Western Capital (Tay Do), but also a symbol of Khmer architecture. Munir Ansay Pagoda (Muni Răng sây) built in 1948 with simple bamboo materials, is located at No. 36 Hoa Binh Avenue, Can Tho City. 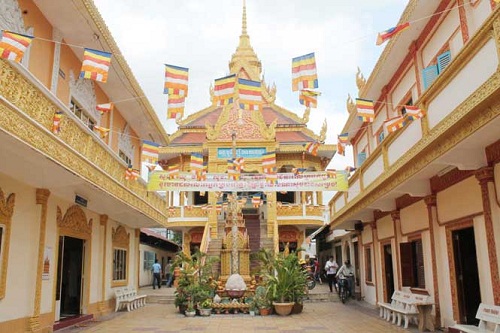 After many times of restoration and reconstruction, the pagoda has the new appearance like today. It was not until 1954 that the new gates were modeled on the Three Treasures tower (Tam Bao), which is part of Cambodia’s famed Angkor Wat complex and in 1964 the new hall was built. Like other Khmer temples, the main hall always turns east because the East is the direction of the gods in Buddhism. 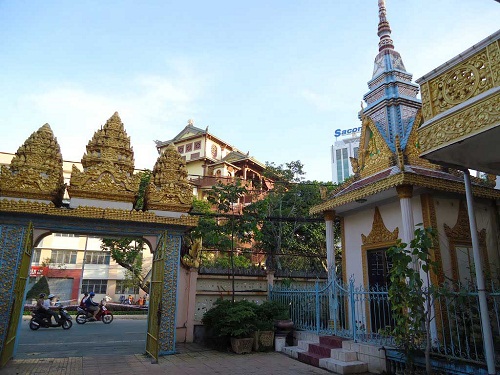 Munir Ansay pagoda is the largest and oldest Khmer pagoda in Can Tho.

In terms of famous architectural works in Can Tho, we have to mention Binh Thuy temple whose other name is Long Tuyen Ancient Temple. This is a valuable architectural work of the traditional Vietnamese art in the reclaiming the Southwest region period. 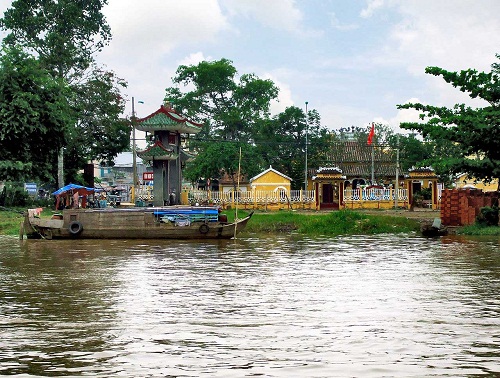 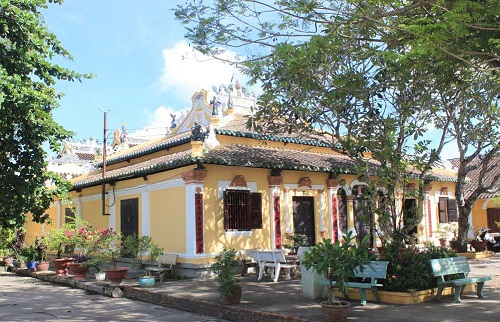 On the left of the temple’s roof, there is a decorated part with cement and in the middle of it is a book (like the one in the Northern temples). Next to it is a peach basket and a flower vase. At the edge of the bottom roof tile are dark green mango leaves cladding and the tile roofs are covered with green glazed tiles. The front of the temple is cement pillars decorated with exquisite embossed flowers. 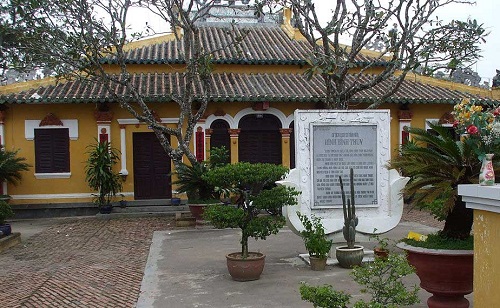 Every year, the local people organize several interesting festivals. The village festival has a joyful atmosphere with many folk games preserved carefully till present such as duck catching, tug of war, bội singing, household arts, etc. This is a cultural festival attracting thousands of people everywhere to participate, demonstrating characteristics of the rice civilization greatly (praying for national peace, good weather, peaceful family). Binh Thuy communal temple is one of the three biggest communal temples in the Western region of Vietnam.

In the ancient village of Long Tuyen, there is still a group of 34 ancient houses. The oldest and most prominent one is the Duong’s family house (also known as Binh Thuy ancient house or Binh Thuy orchid garden) at 26/1A Bui Huu Nghia street, Binh Thuy ward, Can Tho city. 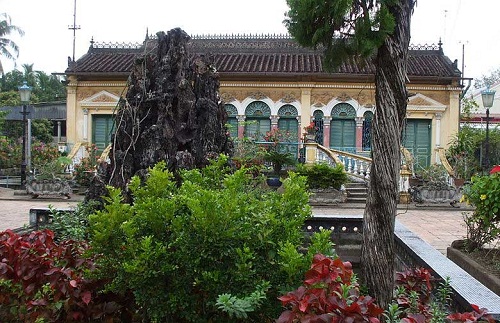 This is a 5-bay, Asian-European style house. Although it was built in 1870, the house still maintained its state. According to the documents, all the tiles, patterns, reliefs, fences and so on are all from France. In addition, the house also has a valuable antique store. 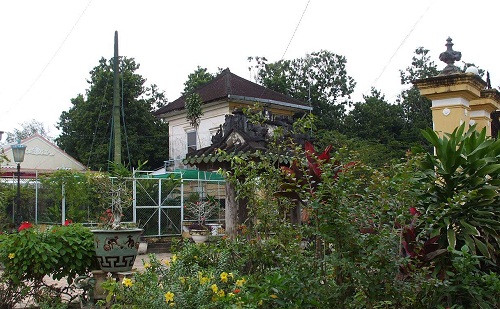 In March 2009, the Duong’s family house was recognized as national relic for architect arts under Decision No. 314 of the Ministry of Culture, Sports and Tourism. 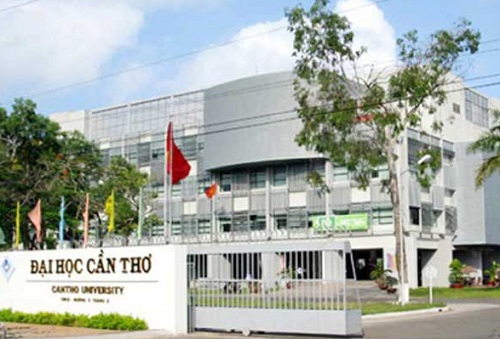 Today, Can Tho University has the most advanced facilities in the Mekong Delta, with four campuses totaling nearly 250 hectares - the second largest university in Vietnam.

The school has three main campuses: 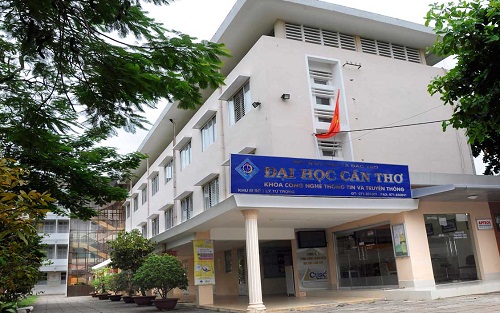 Campus I (No. 411, 30/4 Street, Hung Loi Ward, Ninh Kieu District, Can Tho city) is a campus of the Faculty of Foreign Languages and the Can Tho University Publishing House.

Campus II is located on 3/2 Street (Xuan Khanh Ward, Ninh Kieu District, Can Tho City). It is the largest area with many faculties, classrooms, research institutes, study works and dormitories.

Campus III is the campus of the Faculty of Information Technology (No. 1, Ly Tu Trong Street, An Phu Ward, Ninh Kieu District, Can Tho City)

Campus IV (Hoa An Campus) of Hoa An Commune, Phung Hiep District, Hau Giang Province, is an area of 130 hectares. Hoa An Campus which was inaugurated in 2014 is the campus of the Faculty of Rural Development and the Center of National Defense Education.