Currently located at Phan Dinh Phung Street, Ninh Kieu District, near the headquarters of the Can Tho Journalists Association, there is a large watchmaker with the sign "Imprimerie de l'Ouest" (Western Printing) near the roof of the building. This old mark, little known to locals, shows the development of the young printing industry at the time. 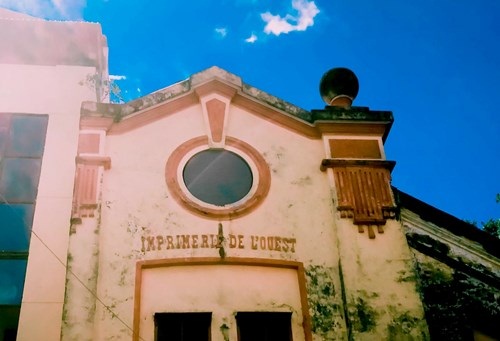 These words in high relief on the cement wall have been aged over the years. When you type the keyword “Imprimerie de l’Ouest” on Google, you will find almost no results. The image of the building is posted on social networks by foreigners who call it "imprint of yesteryear" in Can Tho although they are not great connoisseurs of this vestige.

The house with these words was the seat of the "Imprimerie de l'Ouest" (Western Printing House), founded in 1911, one of the first establishments in the Western region. The idea of creating the printing house came from Gallois Montbrun, a French lawyer in Can Tho and a group of educated Vietnamese like Vo Van Thom, Tran Dat Nghia, Le Quang Chieu, Pham Ba Dai, etc. According to several documents, the Western Printing House specialized in printing books, diaries, papers, pamphlets and brochures ... for public and private services. Then, its business was gradually going well and became famous throughout the region.

Here are some printing products from the Imprimerie de l'Ouest. As we all know, the valedictorian Bui Huu Nghia, from Long Tuyen village, Can Tho at the time, was not only an intellectual, honest and upright Mandarin but also a great poet and writer. His most famous work, "Kim Thach ky duyen" (a fabulous love affair between Kim and Thach), marked the turning point of Vietnamese opera at the end of the 19th century. The scenario of this musical piece was printed, for the 1st edition, in 1895. We collected a cover of it in 1933, at the bottom of the page was written "Can Tho - Imprimerie de l’Ouest - Nha in An Ha, 1933". The price of the book was $0.80. The design of the book covers was elegant, not too sophisticated but modern.

11 years earlier, in 1922, the 4 volumes of the novel "Love lost" (Lỗi bước phong tình) or “History of Madame Jeannette” (Chuyện cô Ba Jeannette) of the writer Nguyen Thanh Long were published by Imprimerie de l’Ouest (Can Tho), which is Western Printing's concern for the literary sector. We found in the newspaper "Women's Gazette" or literally "New Women's Letters" (Phụ Nữ Tân Văn), number 111, published on December 2nd ,1931, an advertisement entitled “useful books to buy”: (original): Gentlemen and village chiefs, for your knowledge of the administration, buy “TÂN- THƠ- TỔNG- LÝ- QUY- ĐIỀU” - New collection of cantonal and communal legislation Annamite Cochinchina, of Mr. Ernest Outrey, former director of arrondissement, translated into Quốc Ngữ (Latinized Vietnamese writing). Price for each book is $4.10 and $ 0.34 for delivery charges. Whoever wants to buy this book can contact "Imprimerie de l'Ouest, Can Tho". This shows that apart from the variety of printing products, “Imprimerie de l'Ouest” did marketing and advertising to attract customers.

The local newspaper “Le Courrier de l'Ouest” (in French) was launched by the founders of “Imprimerie de l'Ouest” in 1911. The monthly news of 2 pages in small format irregular publication yet, mainly published ads, administrative, commercial, agricultural, technical, transport information, events in Can Tho and the region. The annual subscription cost $ 3 and the one for 6 months cost $ 2.

Shortly afterwards, in 1917, An Ha Nhut Bao, the first daily in the Southwest region written in Quốc ngữ (Latinized Vietnamese writing) was founded by Vo Van Thom and his intellectual, devoted and civilized friends. The ambition of the group, interpreted by the name of the newspaper, was to create a newspaper at the regional level. However, for several reasons, at the end of 1917, the daily became the weekly An Ha Bao, released every Saturday or Thursday afternoon, widely distributed in Can Tho and other western locations. The annual subscription was $ 5 and the 6-month one was $ 3.

According to many documents, the activity of the newspaper was down and officially stopped in 1933 after the return to France of the lawyer Gallois Montbrun in 1932. An Ha printing house (Imprimerie de l'Ouest) later called An Ha An Quan, meanwhile, existed until after the August Revolution.

"Imprimerie de l'Ouest" - an imprint of yesteryear in Can Tho!

- Provincial Committee of the Can Tho Communist Party - Can Tho People's Committee, 2002; "Địa chỉ Cần Thơ" (Can Tho Chorography)