Can Tho Grand Prison is currently located at No. 08, Ngo Gia Tu Street, Tan An Ward, Ninh Kieu District, Can Tho City. 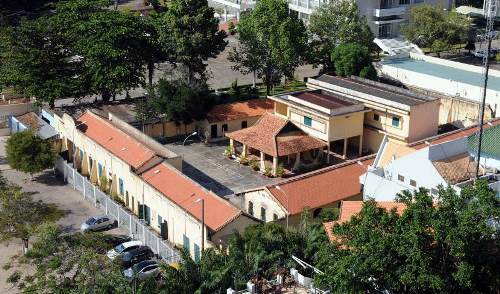 In order to serve the ruling apparatus in Can Tho, from 1876 to 1886, The French colonial empire promoted the construction of many agencies and offices ... including a jailhouse named "Prison Provinciale". This penitentiary, which is often called Can Tho Grand Prison, was built on an area of 3.762m2, adjacent to the Province Chief’s Palace, opposite the Administrative Court and located separately from residential areas. When the Geneva Agreement was signed in 1954, the government of Ngo Dinh Diem decided to change the name “Can Tho” into “Phong Dinh” province and Can Tho Grand Prison was renamed the correctional facility. Whatever the name is, Can Tho Grand Prison is still the “living hell on earth” where the colonialists and imperialists used to imprison and torture Vietnamese soldiers and patriots.

Looking from the front, the Grand Prison’s entrance is an archway. On the left side of the archway is a series of wardens’ houses and on the right is the office as well as the residence of the chief inspector. Can Tho Grand Prison is surrounded by walls of 3.6m to 5m high, filled with glass scraps and barbed wire fences. At each corner, there is a 6m high watchtower with guards and floodlights illuminating the night to keep an eye on inmates. Inside the Grand Prison, there are 21 prison cells and chambers for solitary confinement. Between the two ranges of the prison, there is a large yard for prisoners to sunbathe. In this courtyard, the French colonists and American imperialists also built pagodas and churches to show respect for the beliefs and religions of prisoners. Around 1963, two blocks were built at the back yard of the pagoda with the ground floor has no wall and used as an in-prison vocational house for prisoners...

The prescribed capacity in each cell is only about 30 to 40 people but sometimes the number of prisoners is up to 70 to 80 people. Especially after the Vietnam’s Southern Revolution, the enemies frantically used all tricks to terrorize and take revenge on our people. Many leaders, party members and Vietnamese people were arrested by French colonialists in Can Tho Grand Prison like Mr. Quan Trong Hoang (Can Tho Inter-Provincial Party Committee Secretary), Mr. Le Van Nhung (Secretary of the Can Tho Party Committee), Mr. Ngo Huu Hanh (Member of Can Tho Standing Committee of the Party) and many other comrades. Moreover, they also detained and cruelly tortured hundreds of Vietnamese people who joined the Uprising and leaders in Soc Trang, Bac Lieu and Ca Mau provinces in Can Tho Grand Prison. Particularly, in the American War, the US imperialism issued the notorious “Law 10/59” to terrorize our people and arrest all men who was a suspected "Viet Cong"; at that time the number of prisoners in each cell was up to over 100 people. Many prisoners who could not bear the harsh imprisonment, torture, and terrible food died slowly in this dark jail. The rest of them were infected with all kinds of diseases: scabies, malaria, typhoid, tuberculosis, etc. For special-type political prisoners, they were locked up in separate cells, tortured to paralysis but still remained loyal to the Party, to the people and kept fighting for national liberation till their last breath.

After the complete liberation of the Southern region, Can Tho Grand Prison has become an evidence of many non-fading crimes of the colonialists and imperialists. Here, many outstanding, heroic sons and daughters of Can Tho homeland and neighboring provinces sacrificed for today’s peace, freedom and happiness, contributing to the glorious history of the nation. To expose the crimes of colonialism and imperialism and continue to educate the patriotism, the valiant, heroic and resilient fighting spirit of our fathers in the national liberation, reunification of the country for generations today and tomorrow, on June 28th 1996, Ministry of Culture and Information issued Decision No. 1460-QD/VH to rank Can Tho Grand Prison as a national level historical site.

Visiting the historical monument - Can Tho Grand Prison, we also see many images, documents and artifacts associated with each of the political prisoners who were detained here. Particularly, these objects are the embroidered pillow and self-created petroleum stove of comrade Phan Thanh Si, the items that comrade Le Kim Tien prepared for her beloved newborn baby in the prison, the sweater woven by female political prisoners as a gift for comrade Nguyen Thi Hue, comrade Mr. Vo Thi Von’s “áo bà ba” (a traditional southern Vietnamese garment) and so on. The highlight of the exhibition is the picture named "Going to the execution ground" depicting two communist soldiers Le Van Nhung and Ngo Huu Hanh went to shooting ground at 9:30, on June 4th, 1941 by painter To Du.

Today, Can Tho Grand Prison is a place for sightseeing, studying, organizing traditional activities and practicing sports, especially on the national celebrations such as the Reunification Day (April 30th); War Invalids' and Martyrs' Day (July 27th), etc. This historic site attracts a large number of officials, employees of agencies, departments, unions and students and to review the historical traditions and show their gratitude towards the heroes, martyrs and Vietnamese compatriots who bravely sacrificed for the national liberation and unification.