After crossing Thot Not Bridge, we turn left and go for about 6 kilometer to get to Trung Thanh Commune. In this place, almost all local people can show us how to go to the village producing fermented glutinous rice balls. Following the instructions of the indigenous people, we go more than a kilometer to Ba Dang Rivulet, along which there are 80-90 households making fermented glutinous rice balls. This area is in Thanh Phuoc and Thanh Phuoc 2 Village of the edge of Thot Not District (Can Tho City). Mrs. Huynh Thi Diem, Vice Chairwoman of Trung Thanh Women's Association, says, "Here, two out of every three households make Com Ruou as a way to earn their living. 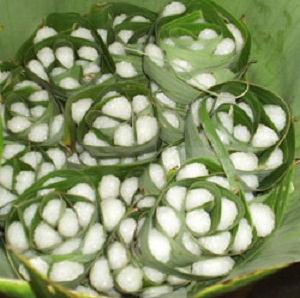 Asking about when the trade of making Com Ruou began, no single elderly knows the exact time. They just know this business has been passed through 4-5 generations. Mrs. Tran Thi Chin has made a living by making Com Ruou for nearly a half-century in Ba Dang Rivulet. Her family has lived on this trade for four generations. It is the trade that "rolls glutinous rice into thumb-sized balls, gets them fermented to become fermented glutinous rice balls.” Mrs. Chin says," when I grew up, my parents taught me this trade. It requires more hard work than it seems to be. Each day, you have to get up at 3-4 AM to make Com Ruou for sale in the following days because it takes 3 days for the glutinous rice balls to be fermented. If you wake up early, you can have time to carry Com Ruou made in the previous day to sell.” Mrs. Chin is very professional in rolling glutinous balls; all of them are in same size and same shape. Despite being 71, she still looks healthy and agile. Whenever someone asks, Mrs. Chin smiles and comments, "I am healthy thanks to this Com Ruou." According to her, this dish is both delicious and healthful. Since ancient time, Com Ruou acts as a kind of medicine beneficial to our spleen and digestion. “It is not a kind of food to fill your stomach. Nor is it a kind of drink that makes you drunk. Yet, as you eat it, you can enjoy its pure flavor and you may feel tipsy if you have much of it.”

At Ba Dang Rivulet, Mrs. Le Thi Duyen is the third generation, but she has the experience of producing and trading Com Ruou for some decades. Ms. Duyen states, "Com Ruou is sold in Can Tho City and throughout other western provinces of Vietnam." Previously, she used to sell it in Long Xuyen (An Giang) or Hon Dat (Kien Giang). Each trip she carried some vessels (a vessel contains 3-4 kg of Com Ruou). To sell a vessel of Com Ruou, she had to walk through every alley of the village for at least 30 kilometers. Far as she went, the profit for each vessel was just about 50,000 VND.

Ms. Duyen says that it is very simple to make Com Ruou. First, clean the glutinous rice with water. Soak it in 3 hours and then drain it. Next, pour water into the pot and steam the glutinous rice. The cooked glutinous rice will be rolled into balls and steamed until they are soft enough. Then wet your hand with salt water and roll the rice into either small or big balls. At this time, sprinkle yeast (which you can buy at small grocery shops) over the balls. Next, separate these balls by banana leaves and put them into plastic or bamboo baskets. Tightly cover the upper part of the baskets while perforating the bottom to let the slightly fermented liquid run out for three nights. Save one part of extracted wine for mixing with the balls for sale. Every 4-5 kg of glutinous rice will produce 2 liters of extracted wine. The rest will be sold at the price of 10,000 VND/liter. This wine is used to make sponge cakes. It can also be used as a traditional treatment for stomachache or for women who have difficulty in giving births. Mrs. Duyen says, "It sounds so easy, but pouring water in the baskets requires sophistication and experience, otherwise, glutinous rice may turn sour or dry. Each person has his or her own experience and skills in pouring water into the vessels."

Ms. Duyen happily tells us the key to have good Com Ruou. Glutinous rice and yeast are two crucial ingredients to decide whether Com Ruou is good or not. Glutinous rice must be sticky and identical without mixing with any other kinds of rice. Yeast must be the best sweet product from Long Xuyen Town, Chau Doc Town (An Giang Province). Yeast must be thoroughly ground into fine powder and mixed with glutinous rice balls before putting them into the baskets for fermentation. Typically, in the dry season, 6 sweet wine yeast balls and one half bitter one (the yeast to make rice wine) are required for 3 kg of glutinous rice. In the rainy season, it is necessary to add 3 more sweet wine yeast balls. Mrs. Duyen adds, "It takes you at least 3 days to make a vessel of yummy Com Ruou and you have to follow several stages. There are indispensible techniques for you to keep in mind. Salt water made from unrefined salt is very important for people while rolling glutinous rice into balls to prevent rice from sticking on your hands. Also this solution helps the glutinous rice become tender and moist. Banana leaves also contribute in deciding the good taste of Com Ruou. From Mrs. Duyen’s own experience, only the leaves from seeded and Xiem banana trees are relevant for delicious Com Ruou while Sap banana leaves are not. Delicious Com Ruou balls are milky white and they are not loosely combined. The liquid is not yellowish or dense. Its tastes should be neither too sweet nor bitter. While Com Ruou is processed, you should keep it away from people who smoke cigarettes, apply medicated oil or chew betel and areca. Anyone that eats Com Ruou permeated such smells will probably vomit.

Mrs. Huynh Thi Diem, Vice-Chair Person of Trung Thanh Women's Association states, "Many women in this village have been selling Com Ruou since they were 15. When they are married and have children, they consider this trade as a kind of intangible dowry to pass to their descendants. Thanks to this, the trade has been preserved up to now."