Font size: +A | -A| Print
Vinh Trinh Temple received the rank certificate of architectural monument at the municipal level
Date: 04/09/2018


On the morning of August 27th, the People's Committee of Vinh Thanh District held a ceremony to award Vinh Trinh Temple the rank certificate of architectural monument at the municipal level. The Temple is located in Vinh Long hamlet, Vinh Trinh commune, Vinh Thanh district. 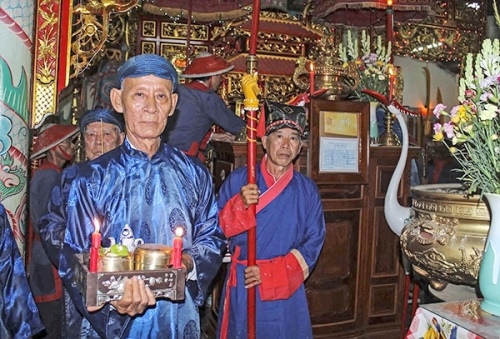 Dinh Trinh Temple was built in the late nineteenth and early twentieth centuries, and was entitled "Bon Canh Thanh Hoang (City God)” by King Tu Duc in 1852. The current temple has the architecture of the letter "yī" (ㄧ), including: The main hall, the front hall, the back hall, smoke house and so on

In 3 days (from 26 to 28/8, which is 16 to 18/7 of the lunar calendar), the Board of Vinh Trinh Temple’s clergy solemnly held the Ky Yen Ha Dien festival with many traditional activities such as the worship of Shennong ceremony, Tien Hien, Dong Hien, Tay Hien, Chanh Te and so on. Besides, there are many recreation activities for people such as bird singing contest, folk games, Southern Amateur singing festival of Vinh Thanh district, etc.