Hai Thuong Lan Ong Temple was built by the Can Tho people in 1967. After multiple repairs and restorations, Can Tho city decided to rebuild the temple in 2012.

Hai Thuong Lan Ong's real name is Le Huu Trac. He was born on December 11th in the year of Mouse - 1720 (Canh Ty) in Van Xa hamlet, Lieu Xa village, Duong Hao district, Thuong Hong prefecture (Fu), Hai Duong province (now Lieu Xa commune, Yen My district, Hung Yen province). Le Huu Trac is a talented, virtuous physician and a great writer, poet and ideologist of the eighteenth century. He passed away in 1791 at his mother's hometown in Huong Son district, Ha Tinh province, at the age of 71. He is a great doctor who has contributed greatly to the Vietnamese traditional medicine as well as a bright star in the history of traditional and modern medicine in medical ethics and art of healing for generations of doctors to follow. 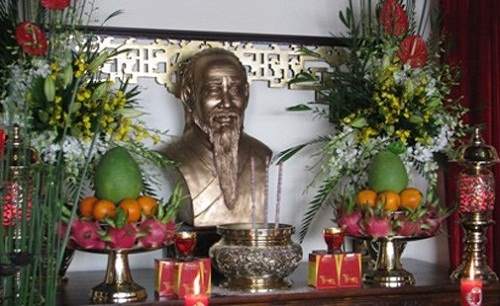 The temple is a place of worship and displaying images along with artifacts about the life and career of the physician Hai Thuong Lan Ong - Le Huu Trac. In the resistance war against America, the temple was not only a place of worship but also a clinic for local people; at the same time, it was also a reliable spot to hide revolutionary cadres who worked in the war zone until the day the South of Vietnam was completely liberated. Furthermore, the first Communist Party cell of An Hoa Town (now Party Committee of An Hoa Ward) was established here.