About 30 kilometers from Highway 91 in the direction from Can Tho City to Long Xuyen Province, turn right and continue going for about 3 kilometers towards Hau River, you will arrive at the center of Thuan Hung Ward, Thot Not District, Can Tho City. Across the river here is Tan Loc Islet. 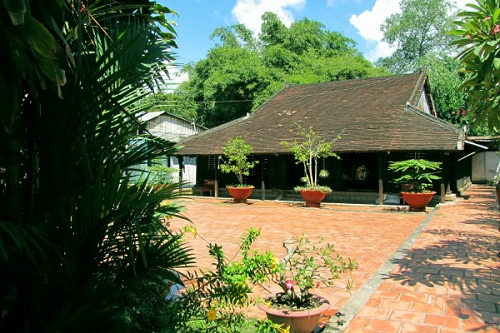 Along the route, both by road and by waterway, through the districts of O Mon, Thot Not, and Tan Loc Islet are several old houses with the architecture of different historic periods. The locals’ ancestors followed Chưởng cơ Lễ Thành hầu Nguyen Huu Canh (the Marquis of Ideal Ritual Observation_ the high ranking general of Lord Nguyen Phuc Chu) and other royal officials of the Nguyen dynasties during the time of Vietnam's southward expansion (Nam tiến) and settle down here. 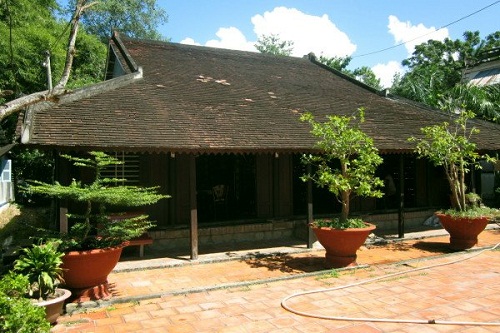 From Thuan Hung's rural market, turn left and go for about 150 meters, you will see a wooden house typical of the Southern ancient architecture with a spacious red brickyard on your left hand. This is the ancient house at 52, Tan Phu Village, Thuan Hung Ward, Thot Not District, Can Tho City, whose owner is Mr. Nguyen Phung Sanh, or Uncle Muoi Giai.

The name "Thuan Hung Ancient House" has become more and more popular since tourists often visit it. Almost all intact architecture and interiors of a house that has existed for nearly hundred years have been well preserved. Near the house is Thuan Hung Communal House _ the center of culture and folk beliefs of the local community. This communal house is in Tan Phu, Thuan Hung Ward right in front of the market. It was first called "Tòa Miếu Võ (Temple of Martial Arts)" set up in 1845, and upgraded to a communal house in 1848. It was also known as Tan Thuan Dong Communal House named according to the name of the area. 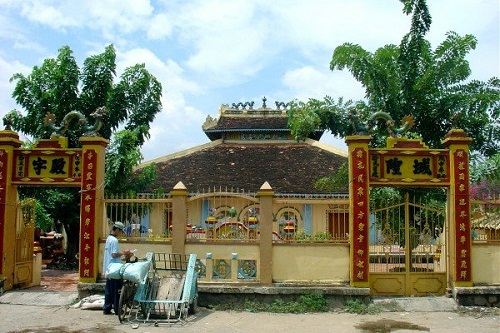 In the middle of 1848, Mr. Le Van Lieu and some villagers made their way to the capital of Hue and offered King Tu Duc to confer sắc thần (the royal decree with honorific words) to revere. The king approved and conferred it "Bổn Cảnh Thành Hoàng (the village’s Tutelary God, the village’s founders, or heroes who sacrificed their lives for the locals or the nation)." Since then, locals’ businesses have been growing day by day with very few troubles, and their life becomes peaceful and happy.

After the completion of Tan Thuan Dong Communal House, Thuan Hung Ancient House was built by Mr. Nguyen Van Ho (or Mr. Nguyen Phung Sanh’s grandfather) in 1925. The house consists of three-compartments with two wings. Initially, there were two additional houses built in 1938; but they were removed to share among their children to build their own house in 1964.

The present house is typical of a traditional Southern architecture with tiled roofs and wooden walls. The façade turns east, the direction of all good things. The floor area is ​​nearly 200 square meters.

The significant difference of this house is that its porch columns are placed on the yard instead of on the floor. The ground is lower than the floor, creating a difference in architecture, and it serves as the transition space from the yard to the house, which helps to cool down the air moving into the house, reducing rainfall, and sunlight. It has all the architectural characteristics of housing in tropical climates.

The main entrance to the house has steps of moderate height, but a bit narrow width, so you have to mind your steps looking down. It is not known if the ancients designed this step on purpose or not, but this was accidentally a bowing gesture when entering, as a ritual of bowing to the ancestors’ altar in the middle of the main compartment. 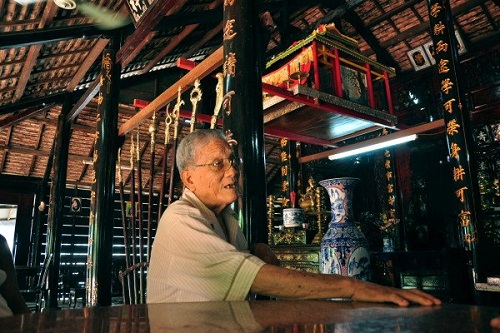 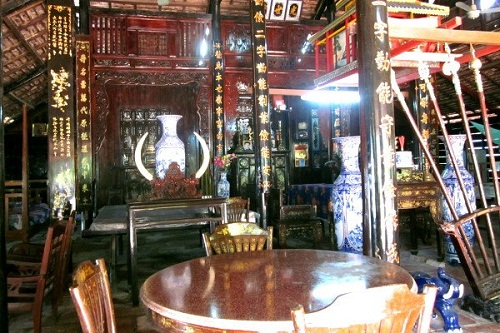 Thuan Hung Ancient House interior. High up in the middle of the house is “khánh thờ” (a litter or a palanquin to carry the royal decree of the village) (Photo: Lam Van Son)

The house has four rows of six columns. All columns are stone-based. Each outer wooden beam is carved with a phoenix's head. Inside the house, there are six pairs of Chinese characters in crush with nacre on the black pyinkado, teaching the young how to be good. Despite its simple color, the interior looks luxurious typical of a flourishing period. The most special feature of the living room is the set of eight martial arts boards of weapons which shows the supremacy of the ancients. Above the living room, in the middle of the house, there is a litter with handles at both ends like a small palanquin. This is where the royal decree of Thuan Hung Communal House is stored.

Only the most prestigious and powerful families in the region are trusted to store the royal decree by the villagers. The royal decree of the village is of a great spiritual value to the community. It is considered as a sacred treasure of the communal house, showing the value of spiritual support for an area conferred by the king. It was conferred by King Tu Duc in 1852. Every year, the priests’ committee, the local authorities, and the people organize a solemn ceremony to escort the royal decree from Thuan Hung Ancient House to the communal house for community sacrifices. After the worshiping ceremony, it is escorted back for reservation to the next year.

The wooden altar set in crush with nacre in the middle of the living room is as old as the house. Its surface carved nacre with scenes depicting the legend Nhị thập tứ hiếu (24 people famous for their filial devotion) of how the young should behave to the elderly.

Two wings on both sides of the house are for resting. The left-wing is for men according to the custom "left for male and right for female" custom. The right-wing for women has sets of boards to rest.

Thuan Hung Ancient House is located in an area with many local cultural aspects. Here you can find ancient houses, southern communal houses, and rural markets, villagers making salty and sweet rice paper, and a ferry across the river. Also, Tan Loc Islet brings you new experiences of the ecological culture via visits to pangasius raft house, or boat making families.

This ancient house is an architectural model imbued with Vietnamese culture in the South. Along with many other ancient houses of Mr. Nguyen Trung Ai in Thuan Hung area, or those in Tan Loc Islet ... they make it very convenient for tourists to enjoy an attractive route by bike, exploring the culture of the land with traditional villages, associated with the period of our ancestors' realm. 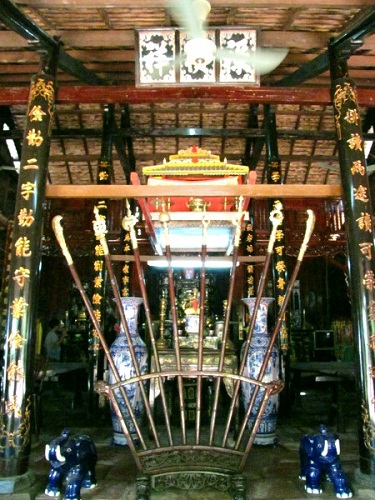 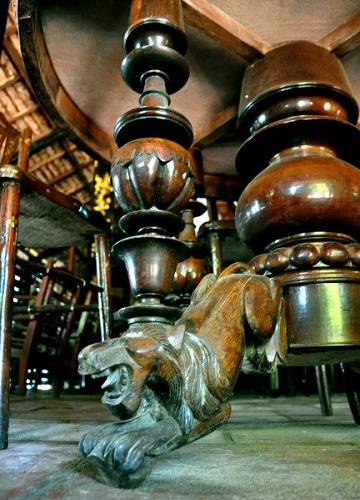 A round table set made of rosewood, with “kneeling” legs on lion's heads. (Photo: Hai Dang) In each of the three compartments, there is an altar for worshiping ancestors. The wooden alter set is carefully decorated with nacre scenes depicting the legend “Nhị thập tứ hiếu” (24 people famous for their filial devotion) of how the young should behave to the elderly (Photo: Bao Thu) 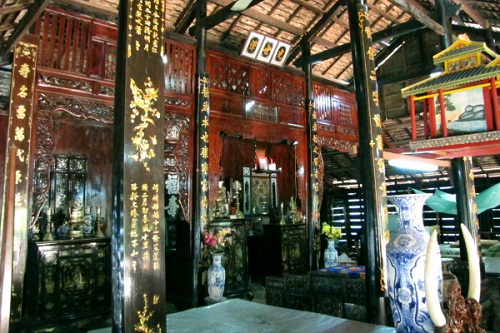 Inside the house, there are 6 pairs of Chinese characters in crush with nacre on the black pyinkado, teaching the young how to be good. They are hung on three rows of four columns (photo: Bao Thu) 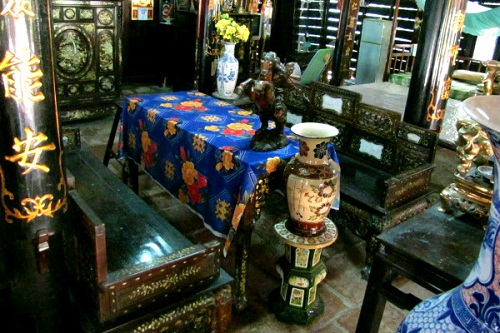 In front of the altar is a counter, with two sets of tables and settees elaborately carved with nacre motifs. Around the house are porcelain, large and small pottery stools, pots and ancient statues ... The interior of the house exudes the majesty of the owner’s family (photo: Bao Thu). 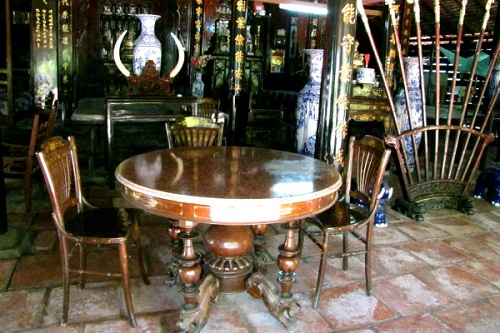 The thick round wooden table with the lion-shaped legs makes viewers admire the superb craftsmanship of the old artisans. (Photo: Bao Thu) 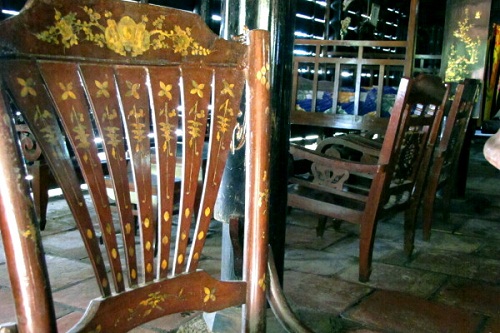 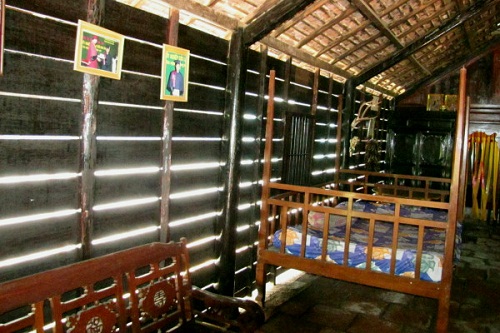 The two sides of the house are wallboards, which are open enough to let the wind in. Beds are put in here. The left ones are assigned for men and the right for women (photo: Bao Thu).