Font size: +A | -A| Print
Thoi Binh Temple is ranked as a monument of architectural art at the municipal level
Date: 26/10/2018


Can Tho City People's Committee has just issued a decision on the ranking of the architectural monument at the municipal level for Thoi Binh Temple, which is located at No. 21 Nguyen Binh Khiem Street, Cai Khe Ward, Ninh Kieu District. 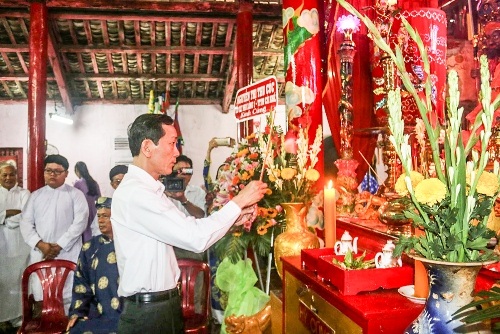 Thoi Binh Temple was ordained by King Tu Duc in 1852. The overall architecture of Thoi Binh Temple is designed in the shape of the letter "yī" (ㄧ), consisting of three square houses with distinctive features like the four pillars, called the four-pillar house. The temple includes several parts such as “võ ca” (front compartment), “võ quy” (the middle compartment), “chánh điện” (the main hall or the last compartment), etc. The horizontal lacquered boards and antithetical couplets on the pillars, the roofs of the temple are Sino-Vietnamese words embedded directly in the wood and coated with valuable golden emulsion paint. In addition to worshipping "Than Hoang Bon Canh” (City God), there are also Thần Tài (Caishen), Thổ Địa (Tudishen), Ngũ Hành Nương Nương (Goddess of five elements), Bà Chúa Xứ (Holy Mother of the Realm) and the like. Every year, there are many festivals in Thoi Binh Temple. The most typical festival is Ky Yen Thuong Dien (in the November of the lunar year) and Ha Dien (in the April of the lunar year).