More than 40km away from the center of Can Tho City, Tan Loc Isle (Tan Loc Ward, Thot Not District) attracts you with green orchards laden with fruits, ancient houses and the plain, friendly lifestyle of South Western people . A day to discover this "sweet island" will bring you many interesting things. 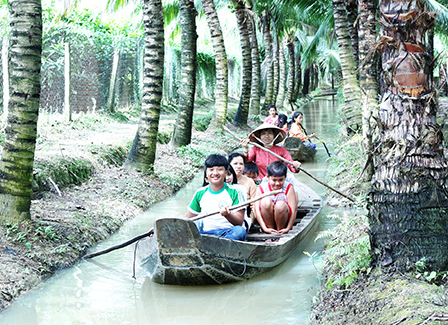 From Highway 91, take Thuan Hung ferry, Tan Loc Isle appears with the green color of orchards. Escaping from the noisy, bustling atmosphere of cities, the other side is an uncannily peaceful space, each gust of cool wind brings relaxed and comfortable feeling.

Along the zigzag village road, we visit Mr.Doan Van Nam’s house (also known as Thanh Nam, born in 1943, Tan An Area) – the owner of the "incomparable" ancient orchard, a senior on the isle. Here, there is a giant Crepe Myrtle tree whose diameter is bigger than two people’s open arms with broad, sprawling foliage casting cool shadow. Mr. Thanh Nam said, "According to botanists, this tree is 327 years old. People around here still consider the tree an "isle relic" because it has been associated with the formation of the isle since the early time, drifted along the tides to this land and then grown up until now". According to Mr. Nam, in the old days, Tan Loc Isle was called the "Tri-province isle" (bordering three provinces of Dong Thap, An Giang, Can Tho). It was the strip of land on Hau River emerging from the sedimentation of alluvial sand from the Mekong River upstream. Therefore, the isle is also known as Sa Chau (Sandy Isle). At the beginning, there was nothing but reeds, then people came to reclaim and they mainly lived on catching mussels, snails, bung bung chang chang (also known as river clam with beautiful nacre shell_ a specialty of Tan Loc Islet). Tan Loc Isle also has many names associated with each development process of the isle. In the years of 1970s-1980s, growing sugarcane and making sugar were well-developed occupations on the isle. During a visit to this charming land, composer Pham Tuyen has composed the song "Que ta co hon dao ngot" (the sweet island in our homeland).  Then, the name "sweet island" came into being. Afterwards, when local people started raft-based fish farming, the isle then was named "fish village". Today, Tan Loc Isle is more than 3,200 hectares wide with fertile alluvial soil facilitating the development of many orchards. From those orchards, many households do tourism, bringing new beauty to the isle.

Mr. Thanh Nam’s orchard is  more than 1.1 hectares, with many kinds of fruit trees such as jackfruit, roseapple, guava, durian, rambutan ... Here, you are not only interested in delicious fruits but also overwhelmed by his "flower kingdom”. His orchard is over 30 years old. The entrance is cool due to the shade from two straight rows of trees, one of which is over 20-year-old eucalyptuses row and the other is a row of amber cedar trees (Japanese breed) over 30 years old, interspersed with bewitching Dutch apricot blossoms, false bird of Paradise flowers. The more interesting thing is masterstroke nests of weaver birds – the kind of birds living mainly in southern orchards. The nests look like perching sleeves, sock swinging on towering branches. Every morning, watching the birds building their nest busily, teaching their babies how to fly could be fascinating! The peaceful and close-to-nature scenes like that are very attractive to tourists, especially foreign ones.

Two or three kilometers away from Mr. Thanh Nam’s house is the unique coconut orchard of Mr. Le Tan Nhuong (Truong Tho 2 Area, Tan Loc Ward). Coming here, you may feel like getting lost in the "coconuts kingdom" of Ben Tre with straight lines of coconuts, leaning along the canal. The coconut orchard covers an area of 7.500 square meters, with 550 coconut trees of all varieties: Siamese coconut, “fire” coconut, pineapple coconut (sweet milk, fresh fragrance)....  After an excursion tour around the isle, you can enjoy the most of the fresh air on hammocks and sweet coconut milk. These canals were dug interposingly with coconut trees; you can row boats leisurely around for sightseeing, and take photos in pleasure. Although just has been operated for over a year, the coconut orchard attracts about 100 tourists per day. In the future, Mr. Nhuong will bring in high-yield varieties of coconut, which bear a large number of fruits, to his garden.

Interesting experiences of the local history and culture

Tan Loc Isle has 12 ancient houses, but only a few of them are still intact. Following the locals, we arrived at the house of Mr. Tran Ba The, often called Mr. Sau The (Tan An Area, Tan Loc Ward). At the age of 94, Mr. Sau The who is still in good health, warmly welcomes us with stories about the origin of the rare ancient house which is still intact over the years. The house was built by Mr. Tran Thien Thoai (Long Xuyen) – father of Mr. Tran Ba The and completed in 1935. Through generations, the house’s architecture, the shape, paint colors and furniture are still reserved. The house has East-West architectural style with three compartments and two lean-tos with square shape. The whole house was built with two layers of brick to create a cool space. The facade was built in the Western style with sophisticated patterned columns. Showing us the Chinese board hanging at the main compartment of the house, Mr. Sau The explained that the board has the name of the owner Tran Thien Thoai. In contrast, in the exit direction there is the Chinese board signifying Manners with the desire to always create comfortable, relaxing mind for people who live in or visit the house. The compartment for worshiping ancestors is set in order: ancestors in the center, grandparents on the left, and parents on the right. In addition, Mr. Sau The also keeps the "family tree" with ten generations of both his father’s and mother’s sides. His house is like a miniature "antiques museum": late 19th-century Chinese wooden style lanterns on the ceiling, incandescent lamps, oil lamp of the United States in the early years of the 20th century, sophisticatedly carved tables, chairs, dishes, vases... Stepping into the yard, you can feel the charming beauty of the ancient garden: over 200-year-old axlewood tree, over 50-year-old line of starfruit trees… 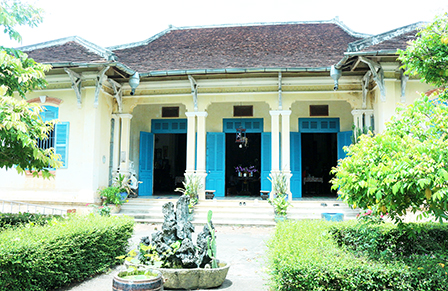 The intact ancient house of Mr. Sau The

In addition to the ancient house of Mr. Sau The, there are other ancient houses of Mr. Nguyen Van Ti, Mr. Nguyen Van Thi, Mr. Huynh Quang Que in here .... Each house is unique in its own; only witnessing them with your own eyes can you feel all the ancient features,  the strange attraction of these buildings. Through stories told by the owners, you will understand the culture and lifestyle of the old South better.

Mr. Le Thanh Nghi, Deputy Chairman of Tan Loc Ward People Committee, says, "Tan Loc Isle has potentials to develop ecotourism. In the future, we will make experience tours for exploring the ancient houses, orchards, countryside cuisine, living with the locals. In addition, we will build some floating houses in the West, near the Vam Cong ferry in order to form a raft village for tourists. We are currently developing projects for tourism investment in the isle, calling for investors". Can Tho City is calling for eight investment projects on tourism, including Tan Loc Isle ecotourism area project (Tan Loc Ward, Thot Not District) with a scale of 2,100 hectares, investment grant of 20 million USD. We hope that by this project, and the attention of the authorities, tourism in this isle will change vigorously.”