The civilized garden land of Phong Dien is widely-recognized for its rich and varied cuisine. The skillful hands of the artisans have made many famously-tasty dishes such as: hammock shaped fine rice vermicelli, rice spaghetti soup, braised chicken with Burmese grapes.... Recently, Phong Dien has added the scrumptious and fully creative Vietnamese sticky rice dumplings stuffed with Muscovy duck meat to enrich its local cuisine. 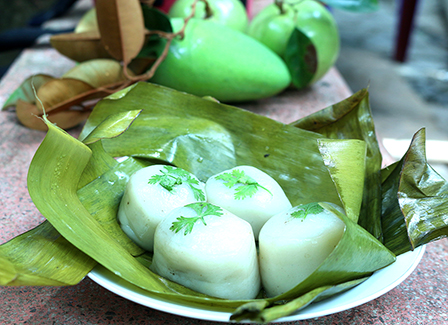 As rustic as its name, sticky rice dumplings stuffed with Muscovy duck meat looks pretty much the same at first glance as other kinds of sticky rice dumplings which are often seen in the folk dishes of the Vietnamese Western region. The main difference is its surface which is charmingly decorated with cilantro leaves on top. Mrs. Lam Thi Khuya, the creator of this cake, said that she just thought of it and had made it for three months; surprisingly it has taken the customer’s heart. The similarity between Sticky rice dumplings stuffed with Muscovy and sticky rice dumplings filled with shrimp, pork, or coconut meat is both made from glutinous rice flour. In order to make these cakes more delicious, Mrs. Khuya only uses homemade sticky rice flour to make the cake’s crust softer. Instead of using meat, shrimp to make the filling, Khuya uses Muscovy duck meat for better taste. Duck is selected carefully to take the breast or leg meat, then finely chop it along with wood ear fungus, marinate some spices for duck meat to be well-seasoned. Duck meat is already sweet and has a good texture with an addition to the crunchy wood ear fungus, which creates newly-flavored cakes. The outer layer is the smooth glutinous rice flour with cilantro leaves being the eye-catching feature. Once the cakes are done, they are placed on a small piece of banana leaf. Spread a little oil on them and then steam them for about 10-15 minutes. After having cooked, they become aromatic and glossy. Accompanied with sticky rice dumplings stuffed with Muscovy are herbs, cucumber, sweet-sour source and fatty coconut milk.

This rustic yet delicious dish has attracted tourists from near and far, thus becoming one of the indispensable main courses in the menu to welcome visitors of 9 Hong garden every weekend.