Rice paper is a traditional and popular dish from the North to the South of Vietnam. 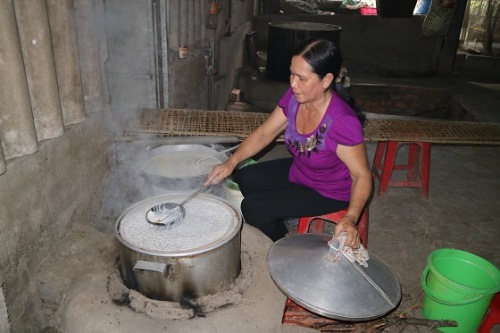 There is an old folk song about the hot rice paper with coconut meat which is the favorite dish among many women:

Getting to know the origin of rice paper

The legend about the origin of rice paper in the Cheu village (Ha Nam) told that around 1347, there was a man in the village who noticed that the local people all year round just ate rice so he wanted to create another dish to change the taste. He devised a way to soak the rice into the water, grind it to dilute flour, then coat it on a cloth stretched on the copper pot. When it is well-cooked, dry it under the sun, cut into small threads like clear rice noodles or Pho. Once rice paper is cooked, add meat, fish, spices ... it is such a delicious and strange taste when enjoying it. Rice paper is also easy to maintain for a long time.

Since then, from his recipe, the people in the village gradually perfect the traditional rice paper. That man is Tran Dinh Han is and he is worshiped by the villagers in the village’s temple as the ancestor of rice paper, and as Thanh Hoang (a deity that is enshrined in each village's communal house in Vietnam). Every year, Cheu village celebrates the festival on the February 10th of Lunar month to commemorate his merits as well as the tradition of making rice paper. This is also a special occasion for separated people due to different conditions can return home and reunite with their families.

Initially, local people called rice paper as Banh Trang in such a rustic and familiar way. The name - Banh Trang (rice paper) is derivative from its special cooking method: coat liquid flour on the fabric stretched on the mouth of the pot. In the 17th century when the Trinh Trang Lord (1577-1657) ascended the throne, Banh Trang was renamed Banh Da (the cake is as round as a banyan leave) by the Vietnamese Northerner because the name Banh Trang in Vietnamese is the same as the king’s name (Trinh Trang), which is incredibly avoided. Consequently, Banh Da becomes familiar to these days.

Another legend says, in the spring of the year 1789 (Year of Rooster), being threated from the invasion of the Qing army, King Quang Trung decided to send troops from Qui Nhon to Hanoi. Considering the far-distanced roads, it would be difficult to transport food; a royal concubine in the harem had come up with the idea of carrying lot of rice paper for the army to eat. In such a far-distanced road, the rice paper would be useful as it was dry, light and easily transported, making it the "field ration" for the soldiers, contributing to the great victory in defeating of Qing army.

The process of making rice paper and how to enjoy it

The main ingredient for making rice paper is rice. People usually choose the type of fragrant and delicious rice to make rice paper. Rice is soaked in the water from the previous night for softening, the next morning, put the soaked rice in the mortar and grind it into dilute flour. Depending on the type of cake, the supplementary ingredient like coconut milk, sugar, butter, or sesame will be mixed with the dilute flour. The main utensil is a large pot filled with water with the round-shaped mouth being stretched with fabric on top (same fabric as mosquito net); a conical-shaped lid (usually made of coconut leaves); a slightly flat coconut shell with the bottom is sharpened to be round and smooth; a thin, flattened bamboo sticks to take the rice paper out easier; a quilling stick made of Areca catechu tree; the rice paper-drying mats made of bamboo or coconut palms.

When the water in the pot has boiled, people use a water ladle to pour the dilute flour onto the cloth; then quickly and skillfully use coconut shells to spread a thin layer of dilute flour in a circular shape (to coat the cake); then put the lid on. Once the rice paper is cooked, use a bamboo stick to take it out and place it on the rolling pin which is put under the cake and then roll it, spread the rice paper on the bamboo mat and dry it under the sun. Baking experience: the good sunlight is requisite to have good rice paper; one person can be in charge of implementing the above steps. However, in order to make rice paper more productive, we need one more person to help dry it.

From traditional rice paper, folk have created dozens of different types of cake. Cake with no sugar, sesame, thin coated rice paper for rolling with boiled meat, grilled fish … to make spring rolls and crispy spring rolls; or we will have steam thin rice pancake and steam rice rolls pancake if we do not dry rice paper under the sun. Moreover, rice paper without drying, sugar contained and stuffed with green beans, coconut meat becomes the sweet-tasted steam thin rice pancake. Sun-dried rice paper with sugar contained is the sweet-tasted rice paper. The type of rice paper without sugar need to be thick coated, added more sesame in order to make grilled girdle cake. Grilled girdle cake accompanied with duck blood pudding, snake minced meat and Greek premna leaves or crushed to eat with Cao Lau (a regional Vietnamese dish made with noodles, pork, and local greens, that is found only in Hoi An) are really delicious. In addition, we have to mention dew-wetted rice paper and mixed rice paper are incredibly popular among young people

Vinh Thanh rice paper originated from the Northern provinces of Vietnam. In 1954, many people in the provinces of Ninh Binh, Thai Binh, Nam Dinh, Thanh Hoa ... migrated to Cai San region for reclamation, establishing their business and the traditional rice paper making method.

In the early 1990s, the soil featured with acidity and alum, which made the livelihoods of the local people arduous. Therefore, the traditional rice paper making was gradually forgotten. In recent decades, thanks to the stability and development of the city economic, the traditional rice paper making has been restored. On good sunny days, following the D cannel and G cannel, visitors will see dozens of houses still making rice paper and drying them in front of the yard. Today, machine is widely-used in most of the houses to make rice paper, only Phan Thi Thanh Nga's family in G2 hamlet, Thanh An commune, has still coated cake by hand. Ms. Nga (Ninh Binh province) said she had retrieved this vocation for 17 years; thanks to the hand making and some secret ingredients, her cakes are more fragrant and crispy than the cake making machine. Her product won the silver medal at the Festival of Southern Folk Cake held in Can Tho City in 2016. 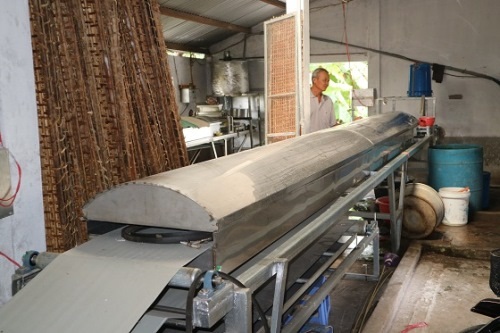 Nhat Nguyet rice paper factory, D2 Village, Thanh Loi Commune of Do Dinh Nhat (originating in Nam Sach, Hai Huong), produces rice paper entirely by machinery. Grind the rice into flour and scrape the coconut by machine, then the rice paper making machine turns the flour into a long cake on a metal trough. The cake is about 2 meters long, after being dried; it is cut into the round-shaped products by a cutting machine. Nhat Nguyet factory averagely makes 800-900 cakes per week; a small sesame cake is VND 3,000, and a big one with more sesame is VND 5,000. Cakes are consumed in many places along the National Highway 80 from Can Tho City to Rach Gia (Kien Giang province).

Traditional rice paper reflects the soul and essence of the Vietnamese village. Not only in Vinh Thanh, but also in many villages in Cai Rang, Phong Dien in the past... many rice paper baking ovens were set up on the full moon in December of the lunar year. These pantries are used for cooking, mainly to help the houses in the village to prepare food for the Lunar New Year. It is the cultural identity – the agricultural civilization. Nowadays, rice paper making machines have been renovated more and more; the traditional rice paper baking ovens are slowly forgotten. Consequently, the atmosphere of making rice paper in Tet festival in the countryside is also lost in oblivion.

In addition to the development of baking facilities by machinery to meet the market demand, it is necessary to preserve the craft oven. Artisans with skillful hands and handmade ovens in the countryside will become tourist attractions and traveling experience.