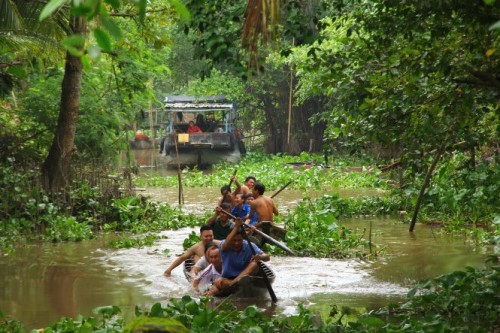 Situated in the Hậu River, a tributary of the Cửu Long (Mekong), the 67ha islet attracts tourists with its serene setting, fresh air, fruit orchards, floating houses, and delicious traditional southern cakes made by locals.

It is 600 metres from the river bank and takes only five minutes by boat from Cô Bắc boat station.

According to Phan Thị Nguyệt, deputy chairwoman of the Bình Thủy District People’s Committee, 74 households live on the islet, earning their livelihoods from farming and tourism.

Fifteen of them offer community tourism services to tourists such as catching fish in ponds, making cakes together with their hosts, visiting fruit orchards and homestay.

Tâm said the city would provide all required support for the islet, with top priority being its infrastructure.

There is now only one boat to Cồn Sơn from Cô Bắc boat station, and the city plans to build a new boat station.

The city will upgrade roads and deploy electric vehicles for visitors to tour the islet.

It has also instructed the district to establish a management board to support locals with and instruct them in sustainable tourism. The board will be managed by the city Tourism Association.

Lê Thị Bé Bảy, deputy head of  Bình Thủy District’s culture and information office and the person in charge of tourism services on Cồn Sơn, said: “The district began community tourism on Cồn Sơn in late 2014, and it quickly became a favourite with local and foreign tourists.”

She said the islet received more than 150,000 visitors in 2015, a surprisingly high figure.

Nguyệt said: “Community tourism has been booming in the Mekong Delta. I’m worried that if we have no new services, we will gradually decline.”

The city’s support is necessary to turn Cồn Sơn Islet into one of the city’s major tourism brands along with Cái Răng Floating Market, she added.