"Citytour" (to visit the inner city) helps visitors to have more interesting feelings about Can Tho City along Hau River. Hiding behind the bustling downtown district, Ninh Kieu is also well- known for various poetic, unique destinations associated with historical, cultural life of the people in Can Tho. 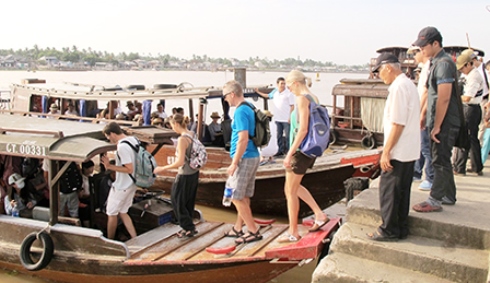 Ninh Kieu Quay is a symbol of poetic beauty of Can Tho City by Hau River, whose charming river scenery has attracts numerous visitors. Most international visitors love to discover Can Tho by a boat trip along Hau River at sunset. Bastien, a French visitor, says, "Early in the morning, I have had the pleasant experience of visiting the floating market. In the afternoon, it's great to watch the peaceful and poetic life of the city.  Viewed from the other side of the river (Xóm Chài or Fishing Village), Ninh Kieu Quay looks so beautiful and graceful." Bastien feels interested to know about the history of Ninh Kieu Quay and the three-light corner. Formerly, Ninh Kieu Quay was a one at the first end of Can Tho Market. Along the riverbank planted a lot of ferns, so the quay was named Hàng Dương Quay.  Here, there was a high lamppost with three bright lights, and so it was called Đèn ba ngọn (a three-light post). In 1958, Hàng Dương Quay was renamed as Ninh Kiều Quay – in commemoration of a battle by the Lam Son insurgent army. Today, Ninh Kieu Quay _ also known as Ninh Kieu Park_ has been expanded with a variety of flowers and become a cultural landmark of the city.

After walking around the Ninh Kieu Quay, you can stop by the ancient market (Can Tho covered market), which sells typical traditional handicrafts and souvenirs. This market (Hai Ba Trung Street, Tan An Ward) is also an ancient famous site, once known as Hang Duong Market or Lục tỉnh Market (Six -province market). This market was built around 1915, at the same time of Ben Thanh Market and Binh Tay Market (Ho Chi Minh City) built. As the most beautiful architectural markets in the Mekong Delta, this was a place for gathering and trading products from the six provinces in the South. It was closely attached to the lifestyle of the Mekong Delta people in the past. In 2005, the market was restored in the original shape of fishbone arched ceiling, yin and yang roof style, and harmonious open spaces. With a total area of ​​1.723m2 in rectangular with two main sides: one facing Hau River and the other facing Hàng Dừa Street (Phan Boi Chau Street and Phan Chu Trinh Street) - associating with the primitive age of forming Can Tho City.

The tour also brings you to visit Ông Temple (No. 32, Hai Ba Trung Street, Tan An Ward) – an ancient one of more than a hundred years old with its unique original architecture. The Ministry of Culture - Information recognized it as the national artistic architecture relic in 1993. Its original Chinese name is Quảng Triệu Hội Quán because it used to be the meeting place of a group of Chinese migrants from Guangzhou and Zhaoqing (Guangdong, China ) to settle down in Trấn Giang (i.e Can Tho in the past) in 17th -18th centuries.

The temple started to be built in 1894 and completed in 1896. Here, Quan Thánh Đế quân (i.e Guan Gong, Guan Yu or "Lord Guan") is worshipped at the main hall, so the locals usually call it Ông Temple. In addition, Thiên Hậu Thánh Mẫu (Maternal Ancestor) and Phật Bà Quan Âm (Goddess of Mercy) are worshipped in here. The temple was built in the shape of the letter Quốc (国), with closed blocks perpendicular to each other. In the middle of the temple is an open space for ventilation called sân thiên tỉnh (a shaft).

You will be attracted by the inner decoration of the temple. Its embossments are elusively engraved in extremely rich contents. Mr. Tran Thien Tai - Deputy Head of Administration of the temple said, "The unique architecture and culture of the temple attracts a lot of visitors. In fact, the proportion of international visitors to the temple is similar to Vietnamese ones. Foreigners would love to learn and experience the local customs and culture. Every year, we organize several activities and attract many visitors."  The annual celebrations include the births of the Gods: Guan Gong (Lunar January 13th), Tin Hau (Lunar March 23rd) ...Other traditional activities are dragon dances, lion dance, kungfu competition, art performances…

Ninh Kieu District also has many other destinations. For example, Pitu Khosa Rangsay Pagoda (No. 27/18, Mac Dinh Chi Street, An Cu Ward) - one of the beautiful Khmer pagodas in the Southwest. It was ranked among the top 100 tourist spiritual destinations, typical for the southern region in 2014.  Đình thần Tân An (Tan An Temple at the roundabout near the water park, Cai Khe Ward) has been inaugurated in August 2015. It was built in 1880 and was conferred the title Bổn cảnh thành hoàng (the city god) by King Tự Đức in 1852. It is considered one of the ancient temples of Can Tho. After many historical events, it was moved to Thoi Binh Temple in 1986. In April 2015, Tan An Temple started to be constructed in an area of 1,725m2. The main compartment was exquisitely embossed and carved.

In the tour to explore the Western, you will have a unique experience at Sáu Hoài Pizza hủ tiếu" (rice noodle Pizza, at residential area 7, An Binh Ward). This produces traditional hủ tiếu, but its owner, Mr. Huynh Huu Hoai, has made a variation and created a new dish "Pizza hủ tiếu", a combination of western and Vietnamese names. Here, you can witness a noodle production process, from the spreading powder mixture, drying and cutting.

Geoffrey, a British, says, "I like the spreading. The producers look very gentle and subtle. I am somewhat clumsy, so the product is not so round. Trade villages are one of the things I like to explore in the tour to your country." Japanese tourist named Takahashi quietly watches each stage. He pays a special attention to products dried in the sunlight. He states, "It is really special. It is thin but very tough. I wonder how they can make it. In fact, they are very skilled workers. I want to do so." After trying making noodles, you can taste pizza hủ tiếu," made from fried noodles with some pork, fried eggs and vegetables, which creates an exotic dish. Owing to this dish, the place has attracted thousands of visitors each week.

In the evening, you can enjoy yourself and have fun at biển Cần Thơ (Can Tho Beach). Though people call it a beach, it is in fact just a river bank of about 400 meters long. Here, many attractive water sports and games are offered: jet skiing, buoy, kayak ... Especially in the evenings, you can enjoy the artistic performances: belly dance, hula dance, bartenders’ performances, street magic ...

According to the Department of Culture - Information of Ninh Kieu District, there were about 1 million visitors to Ninh Kieu and estimated revenue was over 1,000 billion VND until August 2015. Regarding the development of tourism potential, Ms. Do Kim Phuong, Head of Culture - Information of Ninh Kieu District, announces, "The District is working on application to have Ninh Kieu Wharf recognized as a typical tourist site at the city level ​​and the regional level.

Pedestrian Bridge from Ninh Kieu Wharf to Cai Khe Islet is under construction and is hoped to be an attractive site. At the end of this September, various training courses on increasing the locals’ awareness and building a safe, friendl and high quality tourism environment are going to be held by Can Tho People’s Committee, Department of Culture, Sports and Tourism.”

Ninh Kieu District is also gradually building Tan An Temple as a new attraction. It is also investing in various types of tourism: MICE, ecotourism, resorts, the historic, cultural traditions as well as infrastructure in some areas with potentials for tourism development, such as An Binh Ward, Tan An Ward, Cai Khe Ward.