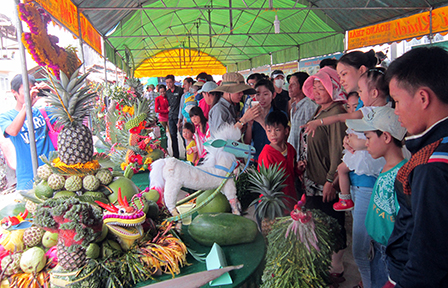 The festival begins with an exchange program of traditional music called don ca tai tu played by many clubs of 9 local wards of Thot Not district in the evening of June 18th 2015. Beside the traditional activities such as rites, a contest of fruit tray display, a contest of strange vegetables, traditional games, cultural exchange,… the festival also has some new activities such as Southern cake stalls, contests of singing birds and bonsai. As planned, on June 19th, Southern cake stalls will be opened; there is also a music program organized by Cultural Centre of Can Tho city and Thot Not district. The festival will host the opening ceremony in the morning of June 20th (or May 5th of Lunar year) with many activities such as a contest of fruit tray display, contests of strange vegetables, bonsai, singing birds, and traditional games.

"Tan Loc Orchard Festival", on the occasion of Tet Doan Ngo every year, has become a cultural feature of Tan Loc islet and attracted tourists from everywhere both in and out of the city. From the size of original ward model, the festival has gradually become a district event with various and fascinating activities.


Source: Can Tho Newspaper - Translated by Phuong Quyen