On December 24th, Mr. Pham Van Hieu, the Standing Deputy Secretary of the City’s Communist Party and also the President of Can Tho People’s Council; Ms. Vu Thi Canh, the Standing Deputy President of Can Tho People’s Council; as well as a lot of delegates and local people participated in the Ky Yen – Thuong Dien Festivals 2018 in Tan An Communal House. 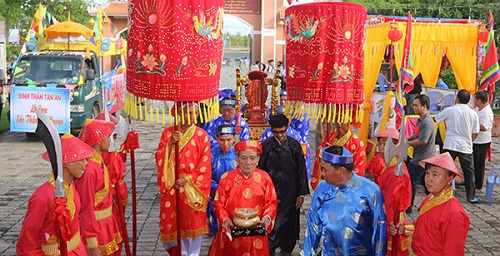 The festivals took place in three days (from 24th to 26th, December, which is also from 18th to 20th, November of the lunar year) featuring various traditional ceremonies such as receiving and escorting Linh Than, the main worshipping procedures, Shennong worshipping procedures, Tuc Yet (introducing the village’s officials to the gods), Xay Chau (drumming), Dai Boi (performing arts) and so on. Especially, in this year’s festivals, the People’s Committee of Ninh Kieu District held the Cultural, Sports, and Tourist Festival with such activities as demonstrating art books, holding contest on making art shapes from environment-friendly materials, physical games, demonstrating traditional cakes and handicrafts, etc. which attracted a great number of participants.

Tan An Communal House was built in 1880 and was one of the oldest communal houses in Can Tho City. It was conferred to be the place for worshipping the Village’s God in 1852. After many ups and downs, the old communal house was no more. However, in 2015, the new one was built at the roundabout on Cai Khe Islet, Ninh Kieu District.


Can Tho Newspaper. Translated by Diep Truong