As usual, in September, people in Phong Dien are eager to enjoy Phong Dien Ecotourism Festival. By 7 times of organizing, the festival has become an annual event to introduce and promote the unique cultural features of the region as well as connect native tourism to visitors. Every year, the festival creates many new marks with diverse activities, bringing strong impression to visitors. 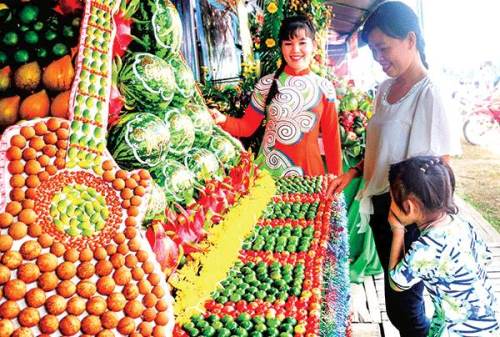 The festival is an event organized by Phong Dien district and the Department of Culture, Sports and Tourism of Can Tho city responding to the World Tourism Day, September 27. This is one of the activities to raise the awareness of the community on tourism as well as promote the tourism strengths of Phong Dien. Also, it gives opportunities for regional people to introduce their fruits, dishes, traditional village products and reproduces the unique culture of the river areas of the South. After 7 times of organizing, the festival constantly expands the quality and scale, gradually creates a space for native tourism culture to attract more tourists coming to Can Tho.

During the four days of the event, from September 26 to 29, there were nearly 17 activities organized, mainly in some places, such as: Phong Dien district square, embankment of Nguyen Phuong Danh park and Phan Van Tri street. In comparison with the previous years, the activities this year have been improved and suitable with people’s lives. Beside the opening ceremony with art performance show expressing the special features in culture and lifestyle of the Southwestern people and the civilization of Phong Dien with the participation of Trong Huu, a People’s Artist, there were many other interesting activities, such as: parade by bicycles and trams, boat rowing show, rowing race, contests and so on.

To be directed toward the green tourism and environmental protection, bicycles and trams were used to parade. These bicycles and trams (around 120 units) marched from the inner streets of Ninh Kieu, Cai Rang to Phong Dien district which aimed to promote and connect inner city tourism routes to suburban ones. Mr. Le Thanh Tung, Head of Culture and Information Division of Phong Dien district, Deputy Head of the Festival Organizing Board said that every year, the Organizing Board tried to create more activities to make new the festival. Accordingly, there were 3 new activities in this year’s festival, including birdsong contest, Phong Dien beautiful photo contest and fruit arranging contest. These were all close to the lifestyle of the local people. The Organizing Board found some special photos expressing the beauty of Phong Dien land and people in the photo contest in which 24 photos were selected and displayed for visitors to see the rustic beauty and the typical features in the development process of Phong Dien ecological urban. These will help Phong Dien promote the culture, tourism, lifestyle and production of people in the region.

One of the outstanding activities, attracting and demonstrating the native characteristic was the contests of arranging fruits into artistic shapes and displaying strange fruits and racing boats. Being known as a fruit region, this fruit arranging contest gathered more than 10 enterprises in the district with many kinds of specialties of Phong Dien, such as: strawberry, durian, seedless orange, longan and so on. Moreover, many artisans displayed their bonsai too. The bird song contest was also held for the first time thank to the trend of collecting and raising birds of some people in Nhon Ai commune and Phong Dien town about two years ago. From this fact, the festival created a playground for people to entertain with more than 60 bird cages and various kinds of birds displayed.

The festival was very crowded when having nearly 180 booths with trade fair activities, tourism promotion of districts and fruit and local cuisine introduction. Visitors could do the sightseeing and shopping, enjoyed local specialties; artworks made from fruits, looked at folk cake performing of artists and took part in folk game activities. Based on the success of the previous year, the traditional market demo was still maintained and expanded with more activities at this year’s festival. There were handicraft works from traditional villages, activities recreating daily life of the people in the South, booths displaying and selling local fruits, folk cakes, food and drink.

The Department of Culture, Sports and Tourism of Can Tho city, Phong Dien district and relevant units have worked closely and rhythmically to ensure the safeness and quality of the event. The dishes and fruits displayed and sold at the festival were selected by the Organizing Board from reputable establishments, ensuring the food hygiene and prices publicly listed.


Source: Can Tho News - Translated by Huynh Loan