A workshop was held in the Mekong Delta city of Can Tho on October 7 to seek improvement of policies and legislation in response to climate change in Vietnam. 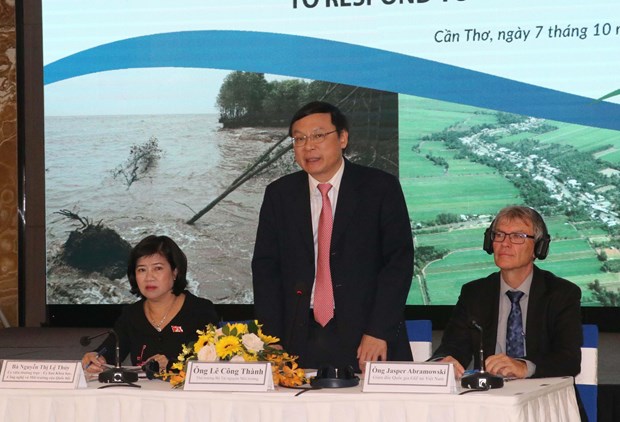 Participants in the event, held by the National Assembly’s Committee on Science, Technology and Environment and the German Agency for International Cooperation (GIZ), discussed such issues as legislation for promoting the business of carbon credit trading and the engagement in the world’s carbon market, renewable energy development, efficient energy use, environmentally friendly production and consumption, science-technology application promotion, and inter-regional connectivity in climate change response.

Those opinions will be taken into consideration during the amendment of climate change-related articles in the 2014 Law on Environment Protection.

According to experts, climate change is a major challenge affecting every aspect of life, economy and society. In recent years, climate change has become increasingly unpredictable with more frequent and serious storms, flooding, drought, saltwater intrusion, riverbank and coastal erosion, and sea level rise, especially in the Mekong Delta.

Deputy Minister of Natural Resources and Environment Le Cong Thanh said policies relevant to climate change will be a focus of a draft law revising and supplementing some articles of the 2014 Law on Environment Protection.

The revision is meant to meet economic development requirements, enhance inter-regional connectivity in climate change response, and perfect the legal framework for realising Vietnam’s commitments in international agreements. It will help not only address challenges posed by climate change but also make use of the chances generated by this global phenomenon, he noted.

Country Director of GIZ Vietnam Jasper Abramowski said Vietnam, which has a long coastline and many deltas, is highly vulnerable to climate change. It has been taking solutions to cope with climate change, and the German Government has also actively helped with the making of climate change-related laws in Vietnam.

He added that with the support and cooperation of the GIZ, Germany’s knowledge and experience will prove useful for the amendment and supplementation of the relevant articles in the Law on Environment Protection, as well as for the coordination with different local agencies in dealing with climate change issues to realise Vietnam’s commitments in the UN Framework Convention on Climate Change.