On the morning of June 19th, Mr. Le Quang Manh, Chairman of Can Tho city People's Committee, had a meeting with a U.S. delegation led by Ms. Mary Tarnowka, the Consulate General of the United States in Ho Chi Minh City. 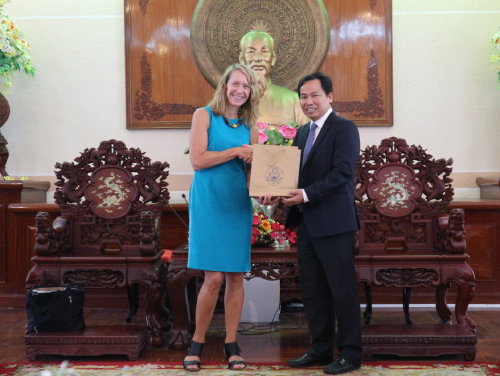 At the meeting, Ms. Mary Tarnowka thanked Can Tho city leaders for supporting her during her term as a consulate general in Vietnam. She also emphasized that the good relationship between the United States and Can Tho city is based on promoting development cooperation. The two sides thereby have achieved several achievements in many aspects, such as: Resolve post-war issues; complete the twinning program between the Can Tho city and Riverside City (California, USA); promote commercial development, tourism, health, education, environmental protection, aviation and maritime security; establish the American Hangout and Maker Innovation space at Can Tho University.

Consul General Mary Tarnowka said that after the end of her term, she will return to Vietnam on a new position with the hope to promote the cooperation relationship with Can Tho city more deeply and more prosperously. At the same time, Ms. Mary Tarnowka asked the city leaders to continue to welcome and create favorable conditions for the new Consul General to fulfill the mission.

Mr. Le Quang Manh hoped that the US Consulate General in Ho Chi Minh City will continue to support Can Tho city in a number of areas, such as: Industrial development, high-tech agriculture, health, education, environmental protection and climate change adaptation. Moreover, he also expected the US Consulate General to create good conditions for Vietnamese enterprises to export more agricultural and aquatic products to the US market as well as focusing on the construction of Smart city and clean energy development in Can Tho city.

At the end of the meeting, Chairman Le Quang Manh congratulated Ms. Mary Tarnowka on having completed her tenure as a consul general in Vietnam and hoped Can Tho city continues to receive her active support in the future.