Since ancient times, people have known the very important role of fire in daily life and in production, and it has been deified and worshiped in most cultures. This religious custom is also popular in Vietnamese culture. 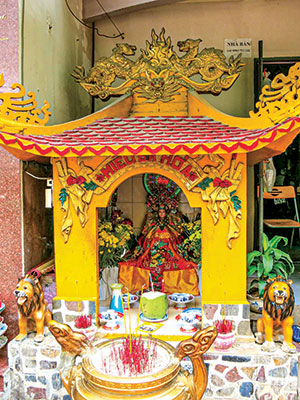 According to Đinh Đông Hải, worshiping or divinization of the fire has been recorded in a lot of cultures around the world. The earliest archaeological evidence of this belief was found in the Indo-Persians around 1500 BC. This is also where the first vestiges of cremation were found. Besides, gods related to the worship of fire or fire legends such as Celtic God Belenus, Slavic God Svarog ... are found in European cultures.  In Vietnam, despite no trace of fire worship found in archaeological artifacts, fire is always an important element in every ritual in ethnic cultures. For example, rituals of ethnic minorities are always performed around a fire (1).

For thousands of years, people have been aware of both the positive and the negative influences of fire: it is both regenerating and destructive. The life cycle is always like this: Destruction to regeneration to destruction and so on. In Vietnam, however, worshiping God of Fire is more of a desire to limit its destruction. For a long time, people have realized the destructive power of fires: only a little carelessness may cause the whole house or village, or even vast forest ... to become ash. Therefore, Vietnamese mythology also called it Bà Hỏa (Goddess of Fire), who keeps a very magical fire and can cook delicious dishes from an empty pot on such a fire, yet normal people cannot use this fire.

Vietnamese folklore tells the story of an old man who happened to find out the fire of God in the forest and pick up some burning charcoal home. Since then, his family became prosperous because they always had big meals every day when they set the fire for cooking. Therefore, they never let the fire off. However, one day when the old man was away, his daughter-in-law came home after carrying water from a stream. Approaching the house, she suddenly saw some fire on the walls of the house, so she threw water to put it off. Since then, they lost all the treasures of God. There are also stories about God of Fire’s subordinates destroying people and trees. Among them was about an evil Bợ, who always stole God’s fire and ran away. He was considered an enemy of humanity (2).

Believing that "all things have spirits or souls", ancient people thought that each phenomenon on earth was in charge by a god authorized by the Heaven such as God of Cloud, God of Lightning, God of Mountain, God of Fire ... In order to avoid possible natural disasters, they built temples or shrines to worship gods, praying for peaceful lives with few or no unluckiness, risks, and misfortunes. This is also why Vietnamese people have worshiped God of Fire.

In fact, the temple to worship God of Fire was built in the imperial capital Thăng Long during the Trần Dynasty, so that the god could protect people from disasters. This ritual to pray for national peace and security for residents in Thăng Long City was also a reminder to them of fire prevention and fighting. According to the legendary artifacts of the temple currently kept at the Institute of Social Sciences Information show that there was a big fire in the capital (now Hàng Trống Street, Hoàn Kiếm District, Hà Nội), in June, 1601_ the year of Buffalo. As the fire spread to Hàng Trống area, King Lê went upstairs to examine the situation and saw an old woman standing on the top of a banyan tree holding a feather brush to wave. The fire was put out immediately; and found an old lady on a mango tree near the communal house waving a flag to put the fire out immediately, so no house in the area caught fire. At the following night, the king dreamt of an old lady in a blue gown bowing to him, saying, "When the street was on fire, I had some merit." Then, she disappeared. Waking up, the king thought that she represented the Goddess of Hàng Trống, and had the temple rebuilt and renamed as Đông Hương because the temple was located in the East of the imperial city. The later rulers reigned the goddess as Lady Ngọc Kiều, the sister of Heaven.

By the year of the Rooster (1837), Thăng Long was renamed Hà Nội. A terrible fire broke out and burned down more than 1,400 houses, causing a lot of deaths and injuries. More seriously, the Governor-General was also nearly burned to death. Thousands of families lost their property. To increase locals’ awareness of fire prevention and fighting, a temple to worship God of Fire called Quang Hoa Mã Nguyên Súy  or Ngũ Hiển Hoa Quang Đại Đế was built outside the East Entrance of Hà Nội Citadel in Yên Nội Hamlet, Đông Thành tổng Thuận Mỹ, Thọ Xương District (now at number 30, Hàng Điếu Street,  Cửa Đông Ward, Hoàn Kiếm District). In the temple is the bell which people will ring if there is a fire. Its sounds alarm normal people and call for God’s help to extinguish the fire. 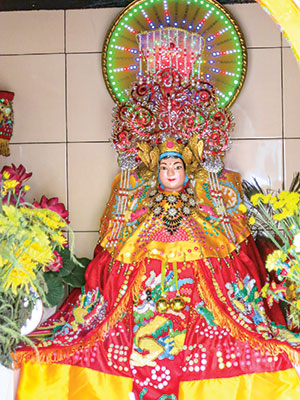 Under the Nguyễn Dynasty, the imperial capital was moved to Huế, a lot of temples were built to worship patron gods; Only God of Fire was not worshiped. According to the main book Minh Mạng, in the year of the Monkey (1824), the members of the Ministry of Rites proposed to build a temple to worship God of Fire. Their proposal read, "Now that the country is free, it is necessary to publish the ritual ceremonies at all levels. All patron gods but God of Fire are worshiped, so it is necessary for a temple to worship God of Fire to be built." Reviewing this proposal, King Minh Mạng said, "My order is for a temple to be built in the north of Ngự River and the yearly ritual ceremony is on June 23rd.” (3)

In the South, this god was worshiped quite early. In the book "Gia Định thành thông chí (General Chronicle of Gia Dinh City", Trịnh Hoài Đức recorded the practice of worshiping Goddess of Fire in Gia Định as follows: " Goddess of Mars is worshiped on the left side of Điều Khiển Market. Because the southern country belongs to the lot of Ly, meaning “fire”. Ly has an empty center, meaning yin or female. Therefore, this must be a goddess. This temple is very solemn and wonder-working, so the very first thing that local people do at the beginning of the year is to come here to sacrifice the goddess, praying for her protection from bad luck. Or else, there will be fires sometime in the year.” (4)

This is one of the five Goddesses called Ngũ Hành Nương Nương in the folk beliefs of the Southern people. These five goddesses symbolize the five substances of the universe. The universe is believed to regenerate everything, so their representation is female and the locals call them “Five Mothers”: Thổ Đức Thánh Phi (Earth), Hỏa Đức Thánh Phi (Fire), Kim Đức Thánh Phi (Metal), Thủy Đức Thánh Phi (Water) and Mộc Đức Thánh Phi (Wood). They are believed to have power over jobs related to land, firewood, metal, water, wood, and thus are worshiped by a large number of people, especially the outskirts of the city."(5)

Thus, in the folk belief, the Goddess of Fire watch out and prevent fires from families as well as villages. Later, as people’s life develops economically, it is believed that Goddess of Fire helps them be better in business and health, and maintains their peaceful life; in the folk mind, "water and fire are two elements with a great impact on people’s daily life as in the common saying " Thủy hỏa đạo tặc (Fire and water bandits"(6).