Folk culture is an enormous treasure, including tangible values (architecture, communal houses, temples, pagodas, shrines ...) and intangible ones (customs, practices, and literature). Having existed and developed in the cultural and spiritual life of Vietnamese people, folk culture has accompanied people throughout the history since ancient time. In particular, popular literature is one of the important constituents in folk culture. Among several folklore genres is the riddle- a popular type which most people love because of its excitement and stimulation for public creativity and wisdom. 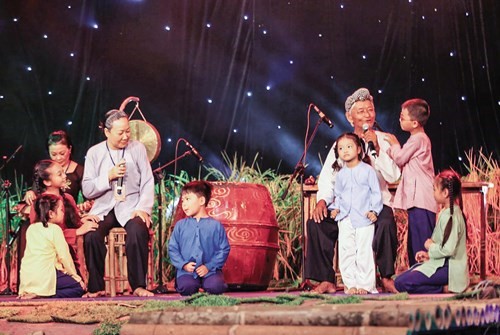 The old and the young showing their talents while entertaining themselves with riddles Photo: Duy Khoi

In folklore culture, especially narratives, riddles appear in various contexts and are used by almost all social classes; from governmental officials’ tales that honor the talents and intelligence of the ancients, to farmers’ competitions in singing riddles, poems, love songs, or fishermen’s singing bài chòi in South Central Vietnam... Researchers of folklore believe that if vè (short poem) is “eventful”, ca dao (folk song) "love", proverb "reasoning", then the riddle is "wise" because it challenges participants’ intelligence and acumen.

Previously, the author of the riddle was mostly the rural mass, so the subject of their riddles was associated with life, events, landscapes, environment, and daily life items. For example,

Whose child is that?

Wearing a white belt and earrings

Making banging sounds as standing by ,

Repeating many times in my ears

Years ago I was as white as ivory

Because frequent sleeps darken my skin

When I am dirty, you hit me and stab me

When I am washed, you lie on me

Almost what people see, experience and use every day can become subjects of riddles such as household tools, houses, agriculture tools and forms of production, daily routines, flora, and fauna ... They focus on specific events and creatures which exist objectively, "all that can be seen with eyes and heard with ears", so it is almost impossible to see the concept of philosophy, morality, religion and other intangible notions. 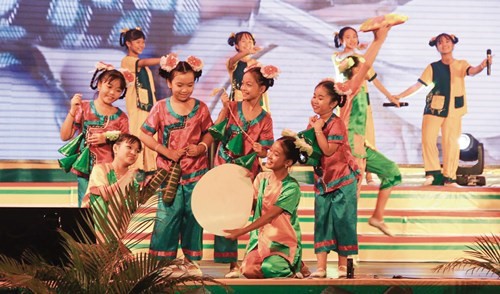 Riddles are loved by children due to their curiosity and exploration. Photo: Duy Khoi

A "vital" feature of riddles is their indirect way of describing things through sayings, poems, and words that are quite mysterious but after "decoded", they become reasonable and acceptable, and everyone feels fun without any refutation. Another striking feature of riddles is their figurative character. As long as the listeners have quick sensitivity and moderate imagination, it is easy for them to guess and find out the answer. For example:

An animal whose temperament is unique and very destructive, and it specializes in one profession: to transfer plague.

In order not to be too difficult for you to be "asked", people also add "clues" for easy guess and solution. For example, glues of "carpentry" refers to items whose main components are derived from trees such as trees, boats, cabinets, beds, tables and chairs ...:

Which king has a black iron face?

Which king stays in a pagoda when in poverty?

A flock of white storks, eat well and take a bath, then lie down.

Four people trampled on the ground, one raised the flag,

Two people are flirting, two are fanning themselves with hand fans

Drops continuously fall on the ground and spread evenly across the field, but do not germinate. They let other seeds grow happily and silently.

In terms of form, most riddles are expressed through rhymes, short sentences, whose meaning is refined in each word, neither redundant nor omitted, and they are very easy to remember.

Over time, the reading culture has developed and the recorded history was relatively coherent and systematic. Higher-level riddles about historical figures have appeared in folk culture.

Who makes vertical and horizontal shiny stilts on Bach Dang River to defeat Nam Han army, and raises a sword of independence high up in the sky?

Another interesting form of the riddle is the "tricky question". There are quite a few legends and historical anecdotes about tricky riddles among foreign envoys with our intelligent, talented and talented ones. The usual ending of such stories is that our winning is convincing because of our intelligence and smartness. Today, tricky riddles are often seen in variety shows and reality shows, students’ activities or parties and festivals. They are often very simple but “tricky” because of misleading information. “One kilogram of iron and one kilogram of cotton. Which is heavier? ” (equal because they both weigh one kilogram) or "Which Lịch (calendar) is the longest?" (Lịch sử _ history).

About half a century ago, newspapers and magazines often had the "Crossword puzzle". The horizontal and vertical letters are cut perpendicular to each other in a certain shape and sometimes spaced at some black squares. People are given clues in the order of A, B, C ... (horizontal); 1, 2, 3, 4 ... (vertical). The players fill in the blanks with suitable letters. When completed, they must match the meaning with the suggested puzzles and must be readable in two dimensions. Those who send their answers to the newspapers the soonest will receive a reward. This game is now widely applied in schools or video games. Scientists have shown that crossword puzzles stimulate ordinary people’s brain and thinking skills. It is one of the forms to train human intelligence for acute behaviors.

Today, the TV programs "Riddles with prizes", "Road to Olympia" ... after all are also forms of "riddles", though they do not follow the conventional style of literature or rhythm. These games aim to increase knowledge and stimulate participants’ speedy intellectual thinking. It is possible to say that the traditional riddles have been developed to new heights so as to be in accordance with reality, social trends, and historical flows.