Water culture is the common link among Southeast Asian countries. In fact, the culture in Vietnam in general, and in the Mekong Delta region in particular, is situated in that cultural space. How to conserve and develop the water culture in the integration period is an issue raised at the International Conference named "Water Culture in Southeast Asia - Conservation and Development" by Can Tho University. 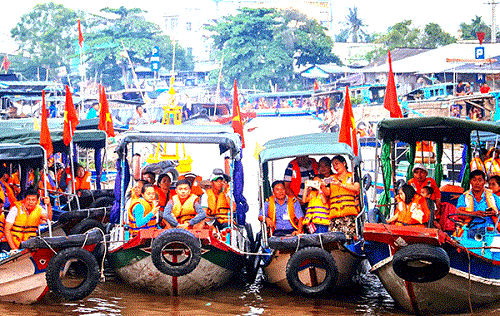 Water Culture in the Mekong Delta

Southeast Asia currently has 11 countries, a large area with about 4.5 million km2 and a population of over 600 million people. Since ancient times, these countries have created rich ethnic cultures based on the common foundation of water cultures associated with rice farming, aquaculture and fishing, and together they have developed their own habits, customs and festivals related to the waters.

The Southern region of Vietnam clearly shapes the water culture. Local and international scientists as well as cultural researchers have recognized that it is the easiest and most obvious to identify this water culture in the South, especially in the Mekong Delta. This region forms the civilization of canals, dykes and gardens with its own unique water features along the rivers such as floating markets, traders on the river, selling boats, songs of people rowing boats ... Dr. Tran Huu Hop (Academy of Politics Region IV) highlights the water culture with the whale worship of Mekong Delta fishermen. The author has made detailed analysis of the origins and forms this belief. He also introduces the unique Nghinh Ong Festival.

In terms of culture of fishing in the South, Mr. Nguyen Thanh Loi (The National College of Education of Ho Chi Minh City) states that identifying the water culture in this respect helps to preserve and promote the traditional cultural values ​​of the southern fishing community more easily and scientifically in the ethnic culture. According to Mr. Loi, "It is the feature of "civilization of canals” that has been prominent in the Southern cultural identity.”

A quite significant mark of the water culture is its reflection in literature, from traditional to modern one. Dr. Tran Van Nam (Can Tho Culture and Arts College) gives interesting comments on such water culture in folklore works in Can Tho. He mentions the anecdotes in Can Tho water culture such as the symbolic pairs such as "fishing - fish", from "fish transformation into dragons" to "fish getting familiar to the fish tank”….Other participants have shared interesting discoveries about the images of the river and wharf through the works of modern writers like Ho Bieu Chanh, Nguyen Ngoc Tu and Mai Buu Minh ...

Directions for Conservation of Water Culture

The conference delegates have agreed that only by being associated with the socio-economic development will the water culture be sustainable. Water culture becomes a living entity to determine the development orientation in the current integration time. In particular, exploiting the water culture for tourism is considered as a good and "trendy" way. Other presentations of the scientists form Thailand, Laos and others have shown this perspective. This trend can be clearly seen in Thai floating market, Laotian Water Festival ..., which has gradually becomes a unique tourism product in the world.

In fact, the resources of water culture in the Mekong Delta and Can Tho are plentiful and can be exploited for tourism. Dr. Dao Ngoc Canh (Can Tho University) states that the floating market and the islet systems on the river are two "golden mines" that, if exploited for tourism, will contribute to promoting and preserving the local culture. According to Mr. Canh, the floating market is a "living museum" of the water culture available only in the Mekong Delta, so it is necessary to harmonize economic interests and preserve this cultural identity. Regarding this issue, Mr. Nguyen Trong Nhan (Can Tho University) presents his assessment of tourism exploitation ability of the Mekong Delta floating markets. He has surveyed 10 floating markets in the Mekong Delta, based on the criteria: geographical location, attractiveness of tourism resources, combination of tourism types, tourism development policies ... His research results have shown that there is a high tourism exploitation capacity in the 4 floating markets: Cai Rang (Can Tho), Cai Be (Tien Giang), Long Xuyen (An Giang) and Nga Nam (Soc Trang). "To avoid self-competition and lack of focus, tourism businesses and localities should concentrate on exploiting tourism in these four floating markets," says Mr. Nhan.

On exploiting water culture for tourism, Ms. Truong Thi Kim Thuy (Can Tho University) suggests to Can Tho City that the local authority should plan its tourism on the basis of utilizing yet reserving the natural environment and rivers, which then helps create a brand of tourism product like "typical garden city" destination and other distinctive products of a river city in the Mekong Delta. She introduces some tourism models with the “water” element in Southeast Asia such as Songkrang New Year festival, Loy Krathong flower garlands and coloured lanterns festival in Thailand; Boun Awk Phansa flower garlands and coloured lanterns festival in Laos; water festival and boat racing Bon Om Touk in Cambodia ... The festivals with the "water" factor in the Mekong Delta such as Ghe Ngo, Ok-om-bok Racing, flower garlands and coloured lanterns festival ... will absolutely become an international tourism product if exploited and well communicated.

Museum of Conserving the Mekong Delta Nature and Culture