Chairwoman of the National Assembly Nguyen Thi Kim Ngan attended a ceremony in the Mekong Delta city of Can Tho on October 4 to a project to upgrade the Lo Vong Cung historical relic site in My Khanh commune, Phong Dien district. 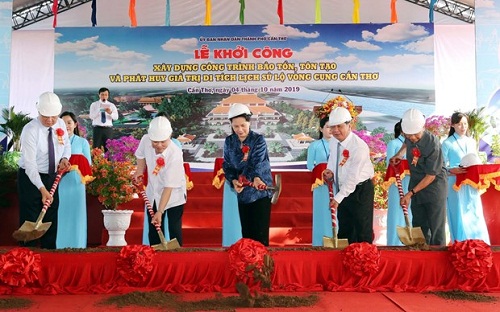 At the groundbreaking ceremony

The project has a total investment of over 99 billion VND (4.25 million USD) from social sources. It will be carried out from now to 2020.

This is a convenient transport route with an important strategic position in the southwest gateway of Can Tho city.

During the resistance wars against French colonialism and American imperialism, Lo Vong Cung was known as a “land of fire”, and held a specially important position from a military perspective.

Many Vietnamese soldiers laid down their lives there, especially in the 1968 Spring General Offensive and Uprising and the historic Ho Chi Minh Campaign that liberated the South and reunited the nation in 1975.

On February 7, 2013, the Ministry of Culture, Sports and Tourism issued a decision recognising the troop transit site, field hospital and weapon cache at Lo Vong Cung as a national historical relic site.

To preserve and promote the value of the site, on April 13, 2018, the municipal People’s Committee approved a project to upgrade it with the construction of a memorial site.